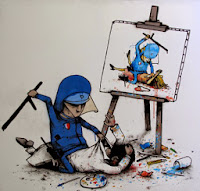 I have noticed a marked tendency to think that once the coronavirus blows over everything will go back to the way it was before—or even better, because of Elon Musk’s electric flying cars and fly-thru sex change clinics or what have you. A simple explanation for this tendency is that it is what people want to think: everyone just wants to go back to what they are used to, picking up where they left off and tickling their wild fancies any way they wish. A slightly more nuanced explanation is that the new, post-collapse reality is a mysterious, unfamiliar realm and that for many people thinking about it is too uncomfortable (if done right) or downright pointless (if it consists of cobbling together stereotypes from movies such as Mad Max and Waterworld or other such post-apocalyptic theme park attractions).

Those who wish to think that what’s happening is just a hiccough caused by a not particularly deadly virus and that this will all blow over soon enough are sure to be disappointed. Taking the US as an example, the crisis clearly started before the virus hit, as evidenced by the steady and quite noticeable slowing of the physical economy since 2018, evidenced by such boring statistics as the lack of sales of new long-haul trucks. But that was before all hell broke loose.

Since February 2020 the US lost 46 million full-time jobs, which is over a third of the overall workforce. Bloomberg forecasts that these jobs will come back no sooner than in six years—and only if in the meantime there is steady economic growth. But then the Congressional Budget Office predicts a GDP decrease of 5.6% and 10 years for it to recover (assuming that the worst is already over) so steady economic growth seems like a bit of a pipe dream. In fact, the Federal Reserve is predicting a second quarter GDP decrease of 52.8%, and so the CBO prediction is only plausible to believers in a V-shaped recovery that doesn’t seem to be happening. I, on the other hand, believe that this recession/depression/collapse has been brought to you by the letter L and the number 0.

A more reasonable expectation is that with the economy already shrunk by half another 20% of full-time jobs will need to be lost in the coming months in a wave of bankruptcies that have so far been held back by various emergency measures such as temporary unemployment benefits, moratoria on evictions and foreclosures, delays in student loan repayment, three-month tax holidays, etc. To keep the financial house of cards from pancaking the US federal debt had to go from $21 trillion to $28 trillion in a rather short period of time, and how much longer this can go on is anyone’s guess, but there seems to be consensus that it can’t go on forever. Meanwhile, data from May 2020 indicates that 26% of Americans could not feed themselves independently, and as this number continues to go up it will become increasingly impossible to ignore the fact that the cupboard is indeed bare and that the once wealthiest nation in the world is now a nation of beggars.

Once a solid majority of the population becomes destitute, what will become of the world’s greatest superpower, the indispensable nation, that shining beacon of freedom and democracy and embodiment of the can-do spirit with liberty and justice for all? On the ground, there are sure to be lots of dumpsters on fire, lots of shops looted, boarded up and out of business, various sections of downtowns becoming police no-go zones (if police are still to be found anywhere) presided over by heavily armed thugs. After all the statues of white imperialist exploiters and oppressors of yore are toppled and all the white people forced to kneel before some very nice people who hail from the ghetto, there is sure to come a moment (at least for those who at that point are still capable of some semblance of rational thought) to ask an obvious question: What, if anything, comes next?

Continue reading... on SubscribeStar or on Patreon (if you want some of your money to go to BLM and from there to the DNC and the Biden campaign—none of that is up to me, mind you!)