In his speech, of 21.04.2021 Putin made a very sharp cultural reference which, if unfolded, offers some major insights as to current events and what is likely to unfold.

First, some background. In February of 2021 Josep Borrell, EU's chief diplomat, made a trip to Moscow which was roundly declared a disaster. While in Moscow, Borrell demanded that Russia release Alexei Navalny, who had just serving out his sentence for a previous fraud conviction. In return, Borrell was shown a video montage of human rights atrocities perpetuated by European police against demonstrators in a number of EU countries and was told that such behavior was unacceptable, implying that the EU was in no position to lecture Russia on human rights.

His trip coincided with the expulsion of a group of European diplomats who had interfered in Russia's internal affairs by becoming involved in political protests there, this being inconsistent with their diplomatic status. Thereafter, minister Sergei Lavrov declared that although relations with the EU are almost dead, Russia will continue to develop its relations with individual European nations. Then, a little less than two months later, several European countries, all of them formerly part of the East Bloc but now part of NATO, started expelling Russian diplomats on a thought-up pretext.

And then came Putin's speech of 21.04.2021, which contained the following passage: "We want to maintain good relations with everyone who participates in the international dialogue. But we see what is happening in real life. As I said, every now and then they are picking on Russia, for no reason. And of course, all sorts of petty Tabaquis are running around them like Tabaqui ran around Sheer Khan – everything is like in Kipling's book – howling along in order to make their sovereign happy. Kipling was a great writer." Upon hearing these words, much of the Federal Assembly he was addressing smiled and laughed. Putin's arrow found its target.

What does this all mean? 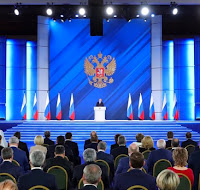 Putin picked the 21st day of the 21st year of the 21st century, in the 21st year of his illustrious reign as an auspicious date on which to give his annual address to Russia's Federal Assembly. You can read it yourself here. What follows is my own opinion as to what it means.

1. The "war" of 2020 is over and Russia has won
2. Russia is going to be very busy making life better for its people
3. Anyone who tries to interfere with Russia will regret it.

Now, let me unfold this for you.

A terrible war is about to erupt on Russia's border with the Ukraine—or not—but there is some likelihood of a significant number of people getting killed before project Ukraine is finally over. Given that around 13 thousand people have been killed over the past seven years—the civil war in the Donbass region of eastern Ukraine has gone on for that long!—this is no laughing matter. But people get desensitized to the mostly low-level warfare that has killed over ten thousand people. Just over the past couple of weeks a grandfather was shot by a Ukrainian sniper while feeding his chickens and a young boy was killed by a bomb precision-dropped on him from a Ukrainian drone.

But what's about to happen now is forecasted to be on a different scale: the Ukrainians are moving heavy armor and troops up to the line of separation while the Russians are moving theirs up to their side of the Ukrainian border, a position from which they can blast any and all Ukrainian troops straight out of the gene pool without so much as setting foot on Ukrainian territory—should they wish to do so. The Russians can justify their military involvement by the need to defend their own citizens: over the past seven years half a million residents in eastern Ukraine have applied for and been granted Russian citizenship. But how exactly can Russia defend its citizens while they are stuck in the crossfire between Russian and Ukrainian forces?

The rationale of defending its citizens led to conflict in the briefly Georgian region of South Ossetia, which started on August 8, 2008 and lasted barely a week, leaving Georgia effectively demilitarized. Russia rolled in, Georgia's troops ran off, Russia confiscated some of the more dangerous war toys and rolled out. Georgia's paper warriors and their NATO consultants and Israeli trainers were left wiping each others' tears. Any suggestion of arming and equipping the Georgians since then is met with groaning and eye-rolling. Is the upcoming event in eastern Ukraine going to be similar to the swift and relatively painless defanging of Georgia in 2008? Given that the two situations are quite different, it seems foolish to think that the approach to resolving them would be the same.

Is it different this time and is World War III is about to erupt with eastern Ukraine being used as a trigger for this conflagration? Do the various statements made at various times by Vladimir Putin provide a solid enough basis for us to guess at what will happen next? Is there a third, typically, infuriatingly Russian approach to resolving this situation, where Russia wins, nobody dies and everyone in the West is left scratching their heads?

I am in the midst of thinking out the next big essay. In the meantime, here is a small vignette from my day-to-day life that I thought you might enjoy.