Rest your eyeballs and prick up your ears: Thomas White of Business Matters gets right past the happy-shiny talk prevalent in the mass media with the help of his two guests: me and Catherine Austin Fitts.
10 comments:

Interview on KOWS FM's What Now with Ken Rose 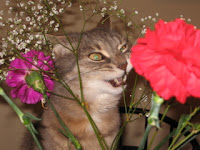 A lengthy and wide-ranging interview during which Ken asked good questions and lent a sympathetic ear. Ken is right that what I have to say is difficult, unsettling and disturbing; so, to offset that, here's a crazy picture of our cat Zoë eating Baby's Breath.
31 comments:

A particularly annoying question I am often asked and have come to hate is: “How do I invest my money for it to survive financial, political and commercial collapse?” The short answer is: “Nohow. Money will not survive collapse; not yours, not anyone else's.” But that answer is not acceptable, because accepting it would require a profound loss of faith—faith in money, a profound Götterdämmerung for a civilization based on the worship of money. People want continue to believe all sorts of things: that they can own land (i.e., shares in the Earth), or that they can do good through philanthrophic spending and charity, or that the world with which they have grown up and have lived their lives can collapse all around them, but that if they are informed and prepared, they can survive with all of their middle-class trappings intact. I am told that there is good money to be made in telling them such things.
Those who care to look can easily turn up plenty of evidence that the value of every type of financial asset, not just fiat currency or debt instruments, is unsupported. Its value derives from the goods and services provided by a functioning global industrial economy, which is quickly running out of every type of resource it requires; not just high-EROEI fossil fuels, but also metals, rare earth elements, phosphate, irrigation water and arable land. As industrial activity dwindles, worker productivity will decline precipitously. Many people point to precious metals as the ultimate storehouse of value, but without industrial equipment a man can only put out about 100 Watts of energy—a light bulb's worth—and won't dance any faster no matter how many gold or silver coins you throw at him.
This eventual outcome is the result of long-term physical trends: physical processes that move at predetermined rates and in only one direction. It is not possible to un-burn oil or coal or to un-mine gold or silver. But the short-term political and financial trends point in an altogether different direction: that of the global industrial economy turning boutique. You see, one shoe has already dropped: the level of industrial activity that can be sustained today is already insufficient to provide anywhere near full employment and a reasonable quality of life for vast numbers of people; the solution is to disenfranchise them, to confiscate their savings, to cancel their retirements, to concentrate all of the remaining wealth in as few hands as possible, and to create a boutique economic and financial environment in which the lucky and unscrupulous few can continue to live comfortably, and... wait for the other shoe to drop, I suppose. That will happen once the industrial economy becomes sufficiently disrupted by social and political upheaval that even its boutique version finally crashes.
A feeble (feeble-minded?) counter-reaction to these trends can be discerned: many people want to somehow find an escape from this system while still clinging to their money. This may seem like a contradiction in terms—“fleeing the money system while clinging to the money itself”—but this point seems lost on many people. Most of this counter-reaction is focused on the stampede to precious metals (gold and silver). This train of thought starts out as a smart market play: precious metals have been and continue to be a spectacular investment, and a good way to avoid being robbed blind by the out-of-control printing presses at the US Treasury. But eventually it goes off into ontological self-delusion—that gold and silver are “real” money, as opposed to paper fiat currency, which is “fake” money. Ladies and gentlemen, it doesn't matter whether or not it's shiny; it's all as real or as fake as you are. Some people go straight over the edge and decide to take the law into their own hands and, waving about a dog-eared copy of the US Constitution, set off to coin their own “coin of the realm,” not realizing that the realm isn't theirs. If the realm is financially stable, it will simply change the rules to make such a gambit unprofitable. If the realm is financially distressed and teetering on the verge of collapse, it will panic, shout “Terrorism!” at the slightest provocation, and the result is long-term political imprisonment for the ontologically deluded:

WASHINGTON (Reuters) – A North Carolina man was convicted for creating and distributing a counterfeit currency that was very similar to the real dollar, a U.S. Attorney said.

Bernard von NotHaus, 67, minted Liberty Dollar coins in the value of $7 million dollars. The conviction concludes an investigation that was started in 2005.

“Attempts to undermine the legitimate currency of this country are simply a unique form of domestic terrorism,” Anne Tompkins, U.S. Attorney for the Western District of North Carolina, said in a statement on Friday.

“While these forms of anti-government activities do not involve violence, they are every bit as insidious and represent a clear and present danger to the economic stability of this country,” she said.

This Reuters story has since been taken down, after being ignored by media in the US (but not in Russia). Von NotHaus is looking at 20 years in jail. This is a lot, you might think, for stamping some politically edgy shiny trinkets, but then Stalin gave out similarly long sentences to millions of people for doing absolutely nothing, so let us count our blessings. Let's get one thing straight, though: in the United States, by law, anyone who, “except as authorized by law, makes or utters or passes, or attempts to utter or pass, any coins of gold or silver or other metal, or alloys of metals, intended for use as current money, whether in the resemblance of coins of the United States or of foreign countries, or of original design . . .” faces a fine or imprisonment. It is the same in every other country: the term “coin of the realm” implies that it is the realm that controls creation of all coinage and its circulation. You can wave your US Constitution around, or you can swat flies with it, or you can use it as kindling: the result will be exactly the same.

You cannot create your own global money system, and you cannot change the way the global money system works; either you are part of it, or you are out. Most of us lack the ability to sever all ties with the financial realm, but, as with so many things, having the right attitude is very helpful. To that end, let me drop a Bible-bomb on you. (I do this as someone quite free of any religious sentiment; I just find the Bible to be an interesting and useful work of world literature, filled with highly quotable, pithy remarks.) Here's a particularly nice quote from the Beatitudes: “Blessed are the poor in spirit.” Never has a truer phrase been written. Many of the more recent self-styled or so-called “Christians” have attempted to distort it to mean that it doesn't imply depriving yourself of any worldly goods, and that “poor in spirit” is a special, strictly spiritual sort of poverty. That is, of course, nonsense. You do not have to dig deep for the real meaning: “Poor” just means “poor,” and “in spirit” means “on purpose, not as a result of, say, injustice, misfortune, or being lazy, stupid or a gambler.” Oh, and “blessed” means “not damned.” Accordingly, Christian monks take the vow of non-acquisitiveness, which is a virtue, with the corresponding vices of stinginess (“what is mine is mine”) and greed (“what is yours is mine”). It is rather difficult to embrace such basic tenets while remaining within a culture that has elevated avariciousness and rapaciousness to the status of virtues. But here is a key insight: being poor on purpose is much easier than being poor as a result of suddenly having less than you are accustomed to having. Voluntary poverty is a hell of a lot easier than involuntary poverty.
And so, the answer to the perennially annoying question “How do I invest my money for it to survive financial, political and commercial collapse?” is this: “There is no answer to your question. Try asking a different question, to which there might be an answer.”
55 comments: