The Future is Rated “B” 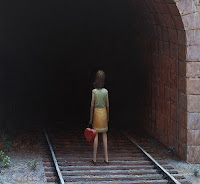 My voluminous fan mail has made me aware of a curious fact: many of my readers seem persuaded that the future is either Mad Max or Waterworld. As far as they are concerned, there just aren't any other options. What's more, some people have even tried to venture a guess as to which of the two it shall be by watching what I do. I live on a boat, and that is apparently an indication that the future must be Waterworld-like. But I have also been seen rattling around town on a rusty old motorcycle, and that is taken as an indication of a more Mad Max-like future.

It saddens me that so few people bring up the film Blade Runner, and it is even more sad that George Lucas's THX 1138 or Jean-Luc Godard's Alphaville are almost never mentioned, because these particular films have in many ways proven to be predictive of the present rather than just the future. Take THX 1138 for example: it is about some people who live in a sealed-off climate-controlled environment, are on a compulsory regimen of psychoactive drugs, are assigned their mates by a computer program, and watch pornography that is piped into their living rooms in order to relax after work. When they refuse to take their meds, they are abused by robot-like police armed with electric cattle-prods. When one of them escapes into the wilderness, it turns out that the police lack the budget to hunt him down. That may have seemed a bit exotic and futuristic back in 1971 when Lucas filmed it, but now describes the people who live down the street. Alphaville, on the other hand, is vaguely reminiscent of some of my more interesting business trips.

People seem uncomfortable with the idea that works of fiction can predict the present, because the present is supposed to be reality, not fiction. The future, on the other hand, is fair game, because it is supposed to be purely fictional: it is common wisdom, you see, that the future is unknowable. The artists are free to paint the future any color they like, while the more scientifically-minded approach it by formulating alternative scenarios. It is useless to try to tell them that there is just the one scenario, apparently written by some incompetent hack, and that, even though it stinks, it is high time they stopped flapping their gums about alternative ones and started auditioning for a role in this one, since it happens to be the only one that is actually being produced.

For the benefit of those who believe that the future is fictional but that the present is real it may be helpful to point out that the present is largely fictional as well. Here's a perfectly good example: do you remember those valiant freedom-fighters who expelled foreign invaders from their ancient land—the mujahideen? What do you think happened to them? Well, they've been rebranded as the Taleban, and are now evil. Same Pashtun tribesmen (or their sons) toting the same AK-47s and carrying out the same missions against strangely similar infidel invaders are, by the simple act of renaming, transformed from valiant warriors to cowardly fiends.

The people whose job it is to write the fiction that we are expected to accept as our one real and true present don't seem to have much of an imagination. They also seem to have had a rather short reading list and lift their ideas from just a handful of slender volumes. George Orwell's 1984 and Aldous Huxley's Brave New World are their particular favorites, along with Franz Kafka's The Trial. Take, for instance, the cult of Osama bin Laden as the mastermind of the 9/11 attacks: it is an image of the perpetual enemy of the state lifted straight out of Orwell. Osama was a sickly CIA operative who succumbed to renal failure a long time ago and who was posthumously demonized using some grainy amateur videos and some muffled audio tapes featuring some other CIA operative. For years now Osama's restless and lonely ghost, clad in white robes and towing a broken dialysis machine across rugged and bare mountain passes of Waziristan has been relentlessly hunted by a swarm of endlessly circling Predator drones. The war in Afghanistan is currently costing the US a billion dollars a day. Sorry to bring up yet another “B” movie, but how much did Ghostbusters charge per visit?

I have no wish to debate these topics, and would urge you to shy away from them as well. There are just a few people who know enough about them, and they generally have no wish to debate them either. There is nothing in it for them—or anyone else. Just about everyone else is either wallowing in blissful ignorance or has been subjected to a mind control process used in advertising: proof through repetition. Here is a contemporary example: a purely fictional phenomenon from the 9/11-season of 2010 known as “The mosque at Ground Zero.” The kernel of truth behind this mainly fictional story is the proposed Islamic cultural center, not a mosque, to be built at a location that is nowhere near Ground Zero, but we now live in a realm of compulsory fiction, reinforced through repetition in the echo-chamber of the media, which makes truth irrelevant. Once the media start ranting and raving like that, it becomes hard for them to stop, and next they trot out some obscure evangelical pastor from Florida who wants to burn a stack of Korans, and they cannot for the life of them stop talking about him either. When in response violent demonstrations erupt in already violent places that are patrolled by US soldiers, that just adds spice to this already wonderful story. I hope that you are beginning to see a pattern here: first a country goes a little bit senile, then noticeably demented, then completely stark raving running-around-naked-smearing-feces-all-over-yourself insane. Then it hurts itself. Individual insanity is rare, but group insanity is, unfortunately, the bane of societies that are nearing their end.

It would seem that, if you are a certain kind of popular author, a good way to ensure that the future comes to resemble your worst nightmares is to write a novel about them. This has certainly worked for Orwell, Huxley and Kafka. But there is also an alternative: compose your own fiction instead of accepting anyone else's, then go ahead and turn it into reality. A good first step might be to write a short story. It can be very short, and it doesn't even have to be particularly interesting. Something as trivial as this might do for starters: “The next morning she woke up and, instead of having a bagel with cream cheese and a cup of coffee for breakfast, she fasted until sundown.” And then, the next morning, she woke up, and something curious happened: this short story came to life, and so it came to pass. Next came other stories, each a bit longer than the previous one, bridging the present and the future in new ways, and eventually spanning decades. And as these decades rolled by, these stories too came to life.

This, as I see it, is the best way forward in a depressed and increasingly demented and accident-prone country that is heading straight for collapse, where the present (reality, what people think is going on, common notions of the state of things) is degenerating into useless noise—the clamor of clueless but self-important people desperately begging you to continue giving them your attention, so that they can stuff your head with more “B”-rated trash. But if you ignore them long enough, they will go away. Don't hope, don't wish, don't dream, but do write your own fiction and use it to create a present that works for you. Invent places for yourself and for those you care about in your stories about the future, and then go ahead and live in them. You don't have to settle for anyone else's “B”-rated nonsense. And don't let anyone tell you that you are crazy or that you are living in a dream. It's not a dream, dammit, it's a work of fiction!
54 comments:

Poverty of Imagination in an Age of Deminishing Resources