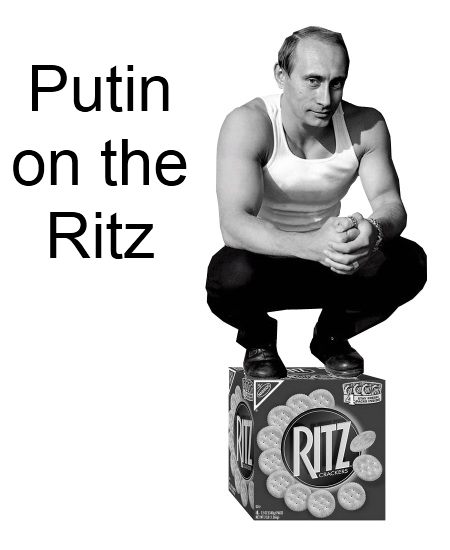 Joke #1: President of Israel calls up Putin and says: “Vladimir Vladimirovich, I didn't know you were a Jew!” Putin says, “I didn't either; what makes you think I am a Jew?” President of Israel says: “You got Americans to pay you $5 billion to take over Crimea. You must be a Jew!”

Joke #2: Putin is watching TV. Calls up his Chief of Intelligence: “Give Tyagnibok a medal for banning the use of Russian in Ukraine. What do you mean he isn't one of ours? Ok, give Yarosh a medal for the idea of blowing up Ukrainian gas transit lines. What do you mean, that's his own doing? How about that cretin Lyashko? How about those cretins from Svoboda—Miroshnichenko and others? So, DO WE HAVE ANY AGENTS ON THE GROUND IN UKRAINE AT ALL?! Where the hell are they? What the hell do you mean they bought a dump-truck of pop-corn and a tanker truck beer and are watching it like a movie?!!!” Hangs up in disgust. Calls again: “How could you let Muzychko get killed?”

My interview on the Pete Santilli Show


My interview starts one hour into the segment.
6 comments:

Over the past few months I've been living in a place that agrees with me in a lot of ways. I like the fact that pets and children here roam free. The dogs roam about in playful packs, and temporarily attach themselves to humans they like. The cats stand their ground against dogs, and bring presents of dead animals to humans they like. There are even some wild horses that graze in the jungle during the day and go to the beach in the evenings, to be petted by tourists. The children quickly develop an ecosystem of their own, and look out for each other, with random adults providing whatever parenting might be required from time to time. Indoor cats, dogs on leashes and “helicopter” parenting are unheard of here. I also like how schedules here are for buses, while people do what they like when they like, depending on the general mood and the weather (which fluctuates between pretty nice and extremely nice). Having such great neighbors does a good deal to heal one's soul.

Ukrainians on the verge of a nervous breakdown

[Wednesday update: In the wake of the Ukrainian defense minister walking away from his job yesterday, there is talk of mass desertion in the Ukrainian army.]


“Since some don't like the decisions I have made, I am not going to stay in this post,” he said before the Supreme Rada (Parliament) in Kiev. The deputies, which initially rejected his resignation, ended up accepting it after an emergency meeting among the different political parties... In his speech before the Rada, he offered a new—and disheartening—tally of desertions: only 4,300 of the 18,800 [Ukrainian] soldiers in Crimea will continue in the Ukrainian army; the rest have accepted the offer by the Russians to join their armed forces.]

In this intercepted phone call Yulia Tymoshenko, a likely Ukrainian presidential candidate (but there will be no elections*) talks about using nuclear weapons on the eight million Russian citizens who live in Ukraine.

[Thanks to Greg for making this possible and to Banana Azul for letting me use their splendid tiki hut.]
Collapse and Systemic Failure at All Levels Coming to U.S.
(But we spend the bulk of the time talking about Ukraine, of course.)

The Madness of President Putin

[Many thanks to Max who helped put this together.]

Of all the various interpretations Western leaders and commentators have offered for why the president of the Russian Federation has responded the way he has to the events in Ukraine over the course of February and March of 2014—in refusing to acquiesce to the installation of a neo-fascist regime in Kiev, and in upholding the right of Crimea to self-determination—the most striking and illuminating interpretation is that he has gone mad. Striking and illuminating, that is, something in the West itself.

It's been three months since the fundraiser and the project is moving along nicely. Details are available here.

Is anyone really in control in Ukraine?

More tweets from our deep throat at Kiev Airport:


The military and the border police continue to confiscate equipment that is being sent for the failed National Guard.

All cargo planes are inspected by the army. From what I can tell, they are of the same opinion as the Air Force.

The military command of Ukraine will make a decision in the next few days and communicate it to Russia, and their government, in that order.

70% percent of soldiers in Crimea have already communicated officially that they are transferring to the Russian army.

The EU, the USA and their blasted mother don't recognize the referendum, yet in Kiev most people accept it and care little or nothing about it.

It's incredible that [the referendum] is more accepted here than in the rest of the world. Why don't they leave these people alone, may I ask?

Military neighbors, friends, colleagues, consider [the referendum] legit and understand it and accept it. The world that gives opinions about these people, doesn't. Strange.]

[While everyone is concentrating on the referendum in Crimea, let's not lose sight of what's happening in the rest of (formerly independent) Ukraine. As we already know, the government in Kiev is dead broke; the aid that is forthcoming from the US is barely enough to cover its debt to Russia's Gazprom, for natural gas. Ukraine's bond yield has spiked to 50% while $15 billion of these bonds mature and have to be rolled over this year.

A lot has been made of the Russian and Belarussian troops massing all around Ukraine and in Crimea, but so far little has been heard of the state of the military within Ukraine itself. But now it appears that Ukraine's military (which has never been involved in any armed conflict anywhere and is poorly trained and poorly armed) is mostly on the Russian side already, and, in any case, not willing to follow orders from Kiev. It also appears that the National Guard goon squads being hastily organized by the government in Kiev may be effective at intimidating civilians, but that they won't be much of a military force.

Picture of the day

The Crimean “Crisis” and Western Bias

Rumors are flying that the US has confiscated Ukraine's gold reserves. It would make sense that the Fed would be gold-hungry, given the trouble they are having "finding" German gold that is "on reserve" with them (but has actually been "leased" to China, where it's been smelted down). And the US did confiscate Iraq's and Libya's gold reserves...

Ukraine's defense minister is trying to whip up hysteria, claiming that the Russians tried to invade and were repelled. (Had the Russians wanted to invade Ukraine, they wouldn't have “tried to”—they just sort of would have.) Looks like the Kiev junta is desperate to start an actual war ASAP, for lack of any other options, while the Russian strategy is to let them simmer in their own juices until the meat falls off the bone.

Two good reads: Vladimir Goldstein's “Let Kerry rethink the arrogance of America” and Ryan Faith's “Why Putin will get everything he wants in Crimea.”]

I appear in the second half of the interview, talking mostly about the situation in Ukraine.
11 comments:

Chronology of the Ukrainian Coup

This is a guest post by Renée Parsons, who did a very good job of pulling together the facts. Facts are important, you know, especially in light of the rabidly anti-Russian press coverage in the US.

[Wednesday updates:
• According to a leaked EU's Ashton phone tape, the Kiev snipers, who shot both protesters and police, were hired by Ukrainian opposition leaders, did not work for overthrown Yanukovych
• It turns out that Russia has a legal right to maintain a military force of up to 25 thousand troops in Crimea in accordance with an agreement signed by Russia and Ukraine in 1997, which will remain in effect until 2043. Current Russian troop strength in Crimea is well under the legal limit. The troops are there to safeguard Russia's Black Sea fleet.
• John Kerry has pledged $1 billion in aid to Ukraine. Ukraine's natural gas bill to Russia is going to be $2 billion.]

Putin has held a conference on Ukraine. Here are the main points:
• No introduction of Russian troops into Ukraine is currently necessary; if it becomes necessary, then all the arrangements for doing so in accordance with domestic and international law are in place.
• Yanukovych is still Ukraine's official president, but doesn't have a future in Ukrainian politics. Ukraine needs reforms, but they have to be carried out in accordance with the law. To this end, a referendum on the constitution is highly recommended.
• All of the military activities in Crimea were carried out by Crimea's self-defense forces, which the Russians wholeheartedly support.
• Russia will not do anything to encourage separatism in Ukraine; such issues have to be decided by the population of Ukraine via a referendum.