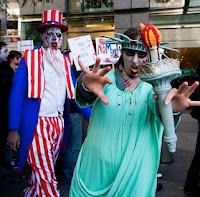 [This is an old reader favorite. Guest post by Anonymous. It's a bit embarrassing really; this is the all-time most popular post on this blog, and I didn't even write it! It's something for you to ponder while this blog is on hiatus because I am out at sea... sailing away...]

Americans, I have some bad news for you:

You have the worst quality of life in the developed world—by a wide margin.

If you had any idea of how people really lived in Western Europe, Australia, New Zealand, Canada and many parts of Asia, you’d be rioting in the streets calling for a better life. In fact, the average Australian or Singaporean taxi driver has a much better standard of living than the typical American white-collar worker.

I know this because I am an American, and I escaped from the prison you call home.


[Another re-run. Regularly scheduled blogging will resume once I've sailed far enough down the coast. Homework assignment: read this article and apply the concepts within it to the Obama administration's policies on Ukraine and Syria.]

Is it morning in America again, or is the bubble that is the American economy about to pop (again), this time perhaps tipping it into full-blown collapse in five stages with symphonic accompaniment and fireworks? A country blowing itself up is quite a sight to behold, and it makes us wonder about lots of things. For instance, it makes us wonder whether the people who are doing the blowing up happen to be criminals. (Sure, they may be in a manner of speaking—as a moral judgment passed on the powerful by the powerless—but since none of them are likely to see the inside of a jail cell or even a courtroom any time soon, the point is moot. Let's be sure to hunt them down once they try to run and hide, though.) But at a much more basic and fundamental level, a better question to ask is this one:

[An excellent article by Paul Craig Roberts. In case you didn't know, Amerigo Vespucci was a big fat liar. And so are the leaders of the country that stole his name.]

The tragedy of September 11, 2001, goes far beyond the deaths of those who died in the towers and the deaths of firefighters and first responders who succumbed to illnesses caused by inhalation of toxic dust. For thirteen years a new generation of Americans has been born into the 9/11 myth that has been used to create the American warfare/police state.

The corrupt Bush and Obama regimes used 9/11 to kill, maim, dispossess and displace millions of Muslims in seven countries, none of whom had anything whatsoever to do with 9/11.

The Madness of President Putin

[This is a re-run. I originally published this article on February 18th of this year, and everything I said in it still stands.]

[Many thanks to Max who helped put this together.]

Of all the various interpretations Western leaders and commentators have offered for why the president of the Russian Federation has responded the way he has to the events in Ukraine over the course of February and March of 2014—in refusing to acquiesce to the installation of a neo-fascist regime in Kiev, and in upholding the right of Crimea to self-determination—the most striking and illuminating interpretation is that he has gone mad. Striking and illuminating, that is, something in the West itself.