An Evening with Dmitry Orlov

CANCELLED
Apologies to the 18 people who bought tickets; they will be refunded.
I'll recycle the questions people have raised into blog posts instead.

Here are some topics for you to choose from or add to (ahead of time) by submitting comments. The venue happens to be in New York, and I can talk fast, so let it rip. (This list came from Phil who organized the event. I'll pick items of interest based on the feedback I get.)

The 2009 IPPY Awards have awarded my Reinventing Collapse silver in the Current Events category. The IPPYS are for independent publishers, with over 4000 entries each year in 65 categories. They don’t necessarily garner much media attention; they tend to look more at the big literary prizes. I am tied with Pat Murpy's Plan C. These are both New Society titles.
16 comments:

I will be giving a couple of talks at a conference in Dublin, Ireland, June 9th through 12th. The conference is sponsored by Feasta (The Foundation for the Economics of Sustainability www.feasta.org.) This is its 10th anniversary conference, entitled:

I will be giving a public lecture at the Davenport Hotel in Dublin on the evening of the 9th, starting at 19:30, as well as a keynote on the morning of the 11th:

It's official: The government in Beijing has announced that the Yuan can now be used in international trade. Their mouthpiece for this occasion was the Industrial and Commercial Bank of China, a private entity, which made the announcement on their behalf. By the end of this year, it is expected that fully 50% of all transactions with Hong Kong will be denominated in the Yuan. In turn, Hong Kong re-exports 90% of its Chinese imports. Importer #1 is the European Union; importer #2 is the United States. Some of these countries may soon find themselves hard-pressed to earn enough Yuan to continue importing Chinese-made products.

This is only the next small step in Beijing's "policy of small steps." Already the Chinese government has ramped down its purchases of US Treasury paper, forcing the Federal Reserve to step in as the buyer of last resort. The IOU, with which the US has inundated the world, is now becoming the I-owe-me - which is not quite as impressive to those who are considering selling products to the US on credit. Instead of the funny paper, the Chinese government has started to buy up gold on the international market. The Yuan has long been in de facto use in Hong Kong, Sigapore, Kuala Lumpur, and other countries in the region, in preference to the US Dollar. In several countries it is already possible to have Yuan-denominated savings and checking accounts; in Hong Kong alone such accounts are set to exceed US$100 billion by the end of this year.

The United States and Europe have recently demonstrated their unwillingness to grant other countries a greater say in the IMF and the other organizations that govern international finance. Now Beijing can turn this combination of weakness and recalcitrance to its advantage, by quickly creating a wide coalition of countries that wish to isolate themselves from the financially untrustworthy regions of Europe and America. This is but one of many developments that those who are predicting economic recovery in the US sometime next year have chosen to ignore, but it may turn out to be one of the more important ones.

What do these major shifts in international finance portend for us mere private citizens? The implication is simple: if you think that you still have some money, let's hope that you don't mean that you have something or other denominated in the US Dollar. Or that you just wrote yourself an I-owe-me. 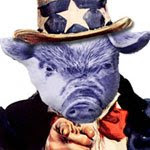 A lot of people are panicked by the swine flu (H1N1) that has recently emerged in Mexico and has since spread across the American continent and far beyond. Panicking is a perfectly normal human response to frightening new things, one which we humans share with our relatives the apes and the monkeys. And, just like them, once we are done panicking, we try to find out what it was that had us panicked.

Swine flu seems like a flu like any, spread through coughing and sneezing and (my personal favorite) wet kisses. If you catch it, you will develop a high fever, your joints and muscles will ache, and a day or so into it you might develop a dry cough. In three days or so your fever will subside somewhat, and in a week to ten days you will recover. Unless there are complications.

It just so happens that, for the next couple of weeks, I will be taking the subway between East Boston and Downtown. It's just a short hop through a harbor tunnel, but at the same time it is a commute between Latin America (on the East Boston side) and New England. I hardly ever hear any English on that train. I would bicycle, but the bike ride is circuitous and very long. Perhaps you'd think that I should consider myself directly in the path of this new contagion, but I probably am not. The carriers are probably mostly tourists and other recent travelers, not the local Latinos.

Flu kills hundreds of thousands of people every year, mainly because they are not healthy to start with. All those drunken bums I see lolling around the Financial District next to half-empty bottles of Listerine antiseptic mouthwash look really unhealthy, and will probably die of something sometime soon. I would venture a guess that their cause of death will be noted as something other than terminal halitosis. Swine flu seems like an impressive-sounding thing to put down on a death certificate. The actual cause of death will probably be something like "Despair" but that just doesn't sound scientific enough for us.

One thing that makes this particular panic interesting is that American public officials are stoking the panic by declaring a state of emergency. (Even our brave Vice President, "Amtrak" Joe Biden, apparently forbid his family to ride public transportation.) There is a simple reason behind these quick declarations of emergency: there is quite a financial drought right now, state budgets are being cut and public workers furloughed. By declaring a state of emergency, public officials gain access to emergency funds. So swine flu is just an excuse for them to vacuum up and spend some loose change.

Another thing that's peculiar is that some nations, notably China and Russia, have banned the import of American pork. Many other countries are following their example. The flu is not spread through eating pork, and so banning it is an economic move and a symbolic gesture rather than a medically motivated public safety measure. But the popular appeal of the symbolism is irresistible: here they have a chance to ban American Swine!

American Swine come in three main varieties: the Hog, the Bankster, and the Neocon. The Hog is often a public safety menace, because factory farming practices result in large groups of immunocompromised animals confined in conditions that are perfect for incubating new diseases. These practices should be banned, and banning American pork around the world seems like a step in the right direction.

The Banksters who have crashed the world financial system through their fraudulent activities should be banned around the world as well. In addition, it would be nice if they were rounded up and herded into capitalist reeducation camps, where, thanks to hard physical labor, daily capitalist indoctrination sessions, and compulsory public self-criticism, they would, over the course of months or years, be reformed into model capitalists, ready to rejoin a free market economy. Perhaps our Chinese friends would be nice enough to send over some advisers, to help us set up these camps.

Unlike the Hogs and the Banksters, the Neocons who illegally murdered, imprisoned and tortured countless civilians across the world should be exported — extradited, that is, to stand trial at an international war crimes tribunal. The list is not that long: Bush, Cheney, Rumsfeld, Rice, Gonzales and a few others. All the ones who "were only following orders" are not important enough. The United States government is bound by international treaty to either prosecute or extradite these people. Since prosecution in the US is unlikely to be carried out properly, extradition remains as the only option. President Obama's recent paying of lip service to this being "a nation of laws" is no substitute for action.