The US and the Five Stages of Collapse


First you have financial collapse, which is basically the volume of debt that has to be taken on in order for the economy to continue functioning, cannot continue. We're seeing that right now in Greece, we're probably going to see that in Japan, we're definitely at a point now in the United States where even if you raised the income tax to 100 percent, there's absolutely no way of covering the liabilities of the U.S. federal government. So, we're at that point now but the workout of the financial collapse is not all quite there. We don't quite have a worthless currency but that's in the works.

That, of course, is followed by commercial collapse especially in a country like the United States that imports two thirds of its oil. A lot of that is on credit and if a little bit of that oil goes missing then the economy starts to fall apart because nothing moves unless you burn oil in the United States and, of course, a lot of goods that are sold everywhere are imported again, on credit. And then commercial collapse is generally followed by political collapse because the Congress no longer has the ability to spend money in the fashion to which they have become accustomed. Governments at every level start failing. We're seeing the beginnings of that where fire and police departments around the country are being cut. Right now there's a big fight over the retirement of retired municipal workers. Retirements are, basically, being looted in order to paper over these giant gaping holes in the finance scheme.

Then the last two stages are I think generally avoidable in most places which is social and cultural collapse. Unfortunately to my thinking these two stages have largely run their course in many places in the United States where people really don't know their neighbors and also they don't really do very much for themselves. They expect to be fed at fast food establishments, they don't know how to cook from scratch, and things like that. So, those are the five stages and a lot of people have found this sort of way of thinking useful in terms of understanding what's happening.

What do you see the United States looking like for Americans in the next 5 to 10 to 20 years?


I think the country will be unrecognizable in 10 years, I don't know about 5, but I don't think it will look like a country in 10 years. I think it will be largely dismembered by it's creditors.

Do you think that we're going to be going quickly or slowly into these different stages of collapse?


I think certain stages like the onset of fuel, transportation, fuel shortages will be very sudden. American society tends to be very fragile. People tend to bring shotguns and baseball bats to gas stations and then every thing goes down hill from there. I expect certain parts of the country to go through this cataclysm where suddenly everything that they depend on, which is basically their car, no longer works and everybody's stranded and very angry. It would be a lot of mayhem. We've already seen that, for instance, during Hurricane Katrina and afterward because of all the refinery problems the '..' pipeline that goes up from the Gulf, I think it ends up in New Jersey somewhere, it couldn't be filled so gas stations in places like North Carolina ran dry and I've heard from people in that area that basically civilization ceased to exist. And then, when gasoline supplies were restored civilizaton sort of came back. That should be the pattern in a lot of places in this country.

There's been some limited coverage of peak oil in the press recently, do you think it's enough to raise the level of awareness for people in this country about the things that you predict are going to happen?


Unfortunately a lot of people simply cannot be reached because they refuse to hear what we have to say. It's not that they can't understand it, it's that they refuse to listen. The media, in general, in the United States makes it very easy because there is this fictional reality that they perpetuate and foist on people that contradicts what we're saying. We're saying that 'this will not continue for very much longer, people'. And then the media says that 'everything is fine, everything is normal', and even the President is now in the game where he says completely nonsensical things like drilling in Alaska for oil will actually make a difference. He recently said that. It contradicts what his own government says about the amount of oil left there. Some of these just fictional feel good messages just saturating the media and so the reality based people really don't stand a chance.

The Twilight of the Antipodes and the Cultural Flip

Presented on May 22 at the Northern California Eco-fest. (For those with browser embed/Google login issues, here's a direct link to it.)

Making the Best Use of your Energy Elves

Presented on May 21 at the Northern California Eco-fest. (For those with browser embed/Google login issues, here's a direct link to it.)

I'll be at the Eco-Fest this Saturday and Sunday. (This little promotional graphic is from Mike Rupert's Collapsenet. Not my words; they reminded me of these lyrics: "A lovely little thinker but a bugger when he's pissed." Perhaps I resemble this remark; you be the judge.)

I'll be speaking on making the best of your Energy Elves (they are like the old fossil-fueled Energy Slaves except much smaller; I seem to have made my peace with them) on Saturday at 11:15.

I'll also give a talk about the topsy-turveydom, hardcore stupidity and inevitability of collapse for the current economic scheme and about the various ways we can compensate for it on Sunday 11 to noon.

There is also supposed to be a Q&A with Mike Ruppert, a book signing and some amount of general milling around and meeting people. If you are in the area, please drop by.
12 comments:

Stage 0 Collapse: Talking hipster robot apocalypse. If you haven't had your fill of text-to-film yet, enjoy. Thanks, Marcus for putting this together.

Reinventing Collapse 2.0 is now in print 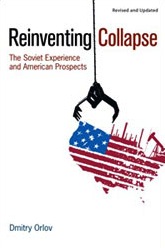 My little box of author's copies has finally arrived, and the rest of the print run will be filtering out to book stores, eventually. If you don't want to wait, the book is also available directly from the publisher.

Since with a second edition there is hardly any excuse for getting things wrong, I have spent what seemed like an inordinate amount editing and finding and fixing errors. And yet, when I opened the newly arrived book I immediately stumbled on a slight imperfection: in it, I suggest that Osama Bin Laden CIA code name would turn out to be "Elvis," but now it turns out that it was "Geronimo" (or his stunt double) who, if you believe the news, was recently killed and dumped in the ocean by a death squad composed of some trained seals. My bad: I should have known that the CIA, being a politically correct organization, would never pick a code name that might be offensive to white people! The world can seem infinitely mysterious; it's all a matter of just how gullible you are.

I am sure that the text contains a few other tiny glitches of this sort, but, in all, the fist edition has stood the test of time. The new edition goes beyond it, putting the unfolding collapse into more of a context. Among other things, it provides a new perspective on how Peak Oil is likely to unfold, and it describes viable collapse-era business management and product development strategies. I am happy that the publisher has decided to keep this book alive for a couple more years, as I hope you will be.
23 comments: