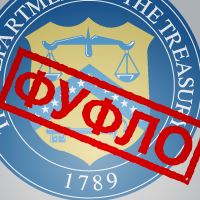 In the unfolding global financial collapse, it is not just our accounts and balance sheets that come up short, but our language as well. What do you call a bunch of liar loans packaged into toxic assets and placed on the balance sheet of the Federal Reserve as collateral for rescue loans? J,K. Galbraith has proposed the term “Bezzle,” taking it to mean the eternal ebb and flow of questionable transactions within an economic cycle. Rational actors cut corners during easy times when they know no-one is looking, and then play nice again when the times change and someone starts paying attention again.

But I believe that the phenomenon we are observing is something different: we need a word that describes the artifacts generated in response to irrational actors who demand to be fooled. As the old saying goes, “A fool and his money are soon parted” – at the fool's own insistence, no less! If the deer comes out of the forest and walks up to the hunter, it is not proper hunting, and this is not proper con artistry or grift or embezzlement or any other term we use to describe proper works of evil. If the victim, at the sight of the economic predator, goes into doggie submission, we must stop discussing the phenomenon in terms of conflict and consider whether what we are observing might be some strange instance of symbiosis.

I am Russian, and so I tend to use my Russian background to look for answers to questions big and small. Sometimes this works rather well for me. It seems that the Russians are better-equipped to survive financial collapse than just about anyone else. They have formidable reserves of gold and foreign currency to soften the downward slide. They have a dwindling but still sizable endowment of things the world still wants, even if at temporarily reduced prices. They have plenty of timber and farmland and other natural resources, and can become self-sufficient and decouple themselves economically should they choose to do so. They have high-tech weaponry and a nuclear deterrent in case other nations get any crazy ideas. After all the upheavals, they have ended up with a centrally-managed, natural resource-based, geographically contiguous realm that is not overly dependent on global finance. Yes, the Russian consumer sector is crashing hard, and many Russians are in the process of losing their savings yet again, but they have managed to survive without a consumer sector before, and no doubt will again.

Be that as it may, because as far as our own welfare is concerned the subject of Russian economic survival will be little more than academic. Perhaps Russia will thrive, all the way on the other side of the globe, just like it did while we wallowed in the Great Depression; how could that be helpful to us, in our predicament? Well, it turns out that Russia has something to offer that should be to our great advantage in coming to terms with financial collapse, and it is something that it is perfectly willing to share with us, because it is just a matter of learning some new vocabulary. All we need to do is borrow a single word, and learn to understand the concept it signifies.

Yes, the Russians actually have a word for precisely the thing that has bewitched us, first accounting for an ever-increasing share of our gross domestic product, and is now responsible for our ever-larger financial black hole. That word is “фуфло” /fufló/ when applied to a quantity of something, and "фуфел" /fúfel/ when applied to a singular item. This word has the obscure English cognate “fuffle,” which the Oxford English Dictionary dates to the early XVI century but fails to define adequately. I suspect that this word has been in circulation in many languages ever since some Protoindoeuropean simpleton showed up at some archaic fair and, being none too wise, bartered his meager trade goods in exchange for what thereafter became known as a fuffle. At that point, his story may have gone two different ways. Either he could have discovered that he'd been handed a fuffle, chased after the unlucky fuffller, and summarily ran him through with a pointed stick (positive outcome) or he could have stumbled back to his village proudly displaying his prize, and perhaps even got his entire tribe to acquire a taste for fuffles (negative outcome). In the latter case, the fuffle-addled tribe could never grasp the meaning of the word “fuffle,” because doing so would have resulted in some painful cognitive dissonance. (Perhaps this psychological mechanism accounts for the fact the Anglo-Saxon tribe still has the vestigial word but no longer remembers its meaning.)

A fuffle is an artful fake, an artifact specifically made to fool, beguile, seduce, or intimidate people into paying for it. Ideally, the initial transaction serves as the basis of a permanent arrangement, with the victim roped into an installment plan, which keeps the payments flowing even after the fuffle itself has crumbled into a pile of dust. An even better fuffle is one that grows over time. Since a fuffle is, in essence, a fake, its useful properties, should it have any, are largely irrelevant, and so its abstract (which is to say, financial) properties come forth as being the essential ones. The most important such property is, quite obviously, size, and indeed fuffles tend to get bigger and bigger over time. This is a telltale feature of fuffles that makes them easier to identify: if something gets bigger and bigger over time while delivering the same or lesser value, then it is quite likely to be a fuffle. Also, fuffles breed: as a fuffle gets larger and larger, it produces offspring of other fuffles, which also grow. Examples come from many realms.

Take, for example, suburban and exurban houses. For a time, people couldn't get enough of them, and at one point fully half of the US population was living in them. Their square footage had increased far past what even a large family might actually need, while at the same time their cost had exceeded what an average family could afford. In the final act of suburban expansion, these fuffled houses begat fuffled mortgages: fraudulent loans clearly not intended to be repayable over their entire term but quickly rolled over into some other fraudulent monstrosity. And fuffled mortgages begat fuffled equity-backed securities. And these begat fuffled government bailouts.

Another example is America's favorite fufflemobile: the SUV. This is a truck chassis made to superficially resemble a gigantic passenger car, with none of the advantages of either and all the disadvantages of both. These were advertised as safer than cars, while they are some of the most unsafe passenger vehicles ever sold. These also grew in size and cost, while begetting fuffled auto loans, and eventually leading to fuffled automaker bailouts.

Or take the gigantic fuffle of guaranteed student loans, which enabled fuffle-like growth in college tuitions. Following a few years of flipping burgers or serving lattes the value of the diploma may be zero, and most of the knowledge it implied either forgotten or obsolete, but repayments continue, sometimes until the poor student's death. And if a period of financial hardship results in a deferment, interest and fees are piled on top of the original loan, allowing it to balloon to an astronomic size that bears no relation to either the value of the diploma or the expected earnings of the graduate. To keep the payments flowing, income and social security payments can be garnished.

My last example is private retirement based on IRA and 401k retirement funds. Unlike proper retirement systems, which transfer a percentage of earnings from working-age people directly to retirees, this fuffled scheme takes these earnings and invests them in some fuffles, expecting these fuffles to grow like they always do, making the retirees well off upon retirement. The non-fuffled fallback, as a lot of retired fufflers are about to discover, is to come to rely on your grown children for support, awkward though that may be.

It may be clear to us that fuffles must be eradicated. But it is almost impossible for a society that has for so long and to such an extent put its faith in fuffles to part with the notion that they are valuable and accept the notion that they are a lot worse than worthless. And so they grow and grow, until they swallow up the entire country. At some point last year, in a vain effort to avert financial collapse, the Federal Reserve started accepting fuffles (which they called “troubled assets”) as collateral for fuffled rescue loans to insolvent financial institutions. Thus, the assets column of the Fed's balance sheet is now loaded with fuffles. And next, we have the US Treasury poised to create the next wave of fuffles. These are US Treasury securities, backed by whatever remains of the full faith and credit of the US Government, but destined to be sold not to investors (who have no taste for any more fuffles) but, in a truly incestuous move, to the same old Federal Reserve Bordello of Blood! They are calling this “quantitative easing.” A better term would be “qualitative fuffling:” the financial snake is finally eating its own tail. The Fed will place these fuffles on its balance sheet as assets, and in return issue prolific quantities of our new national currency: the US Fuffle. Like all fuffles, the US Fuffle will grow by leaps and bounds, by sprouting ever more denominations.

"How much do I owe you for this latte, dear graduate?"
"Well, Sir, that will be six trillion fuffles, if you please."

I would like to thank Dr. Masayuki Ohtani for translating my "Closing the Collapse Gap" presentation into Japanese.

How we treat each other in hard times

I contributed a segment to this week's broadcast of The State We are In, a weekly program of Radio Netherlands. My segment begins at 6:30, but the rest the broadcast, which deals with how the Icelanders treated each other when their economy collapsed, is certainly worth a listen as well. I would like to thank WBUR at Boston University (my alma mater) for providing the studio and the technician.
4 comments:

This interview was recorded last night (US) and aired some hours later in Australia. Audio is available for download here. The host, Philip Adams, was well primed for the occasion and asked thoughtful questions. A good, short introduction to the subject. Although Philips did suggest opening one's veins at the end, he also suggested opening a bottle of wine as an alternative. I am in favor of the latter.
11 comments:

Many thanks to Michele for translating an entire chapter of my book into Italian.