The Flight of the Headless Chicken 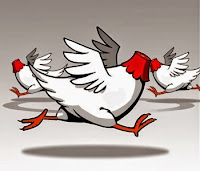 When I was five and spending the summer in a small village a couple of time zones east of Moscow I witnessed the execution of a rooster. My brother and I walked over to a neighbor’s house to pick up some eggs. Just as we arrived the neighbor finally caught the rooster and chopped his head of. The now headless rooster then put on quite an aerobatic performance that was quite amazing. After doing an unlimited takeoff he repeatedly soared and plummeted, executed several touch-and-gos (more like crash-and-goes, actually) and was undeterred by what previously would have been head-on collisions. I was by then quite familiar with the poor aerodynamic qualities of barnyard fowl and was duly impressed with the energetic and breathtakingly erratic behavior of a bird liberated from the mental straitjacket of its brain. Unfortunately, the performance only lasted for a minute or so. A word to the wise: I later learned that it is possible to prolong the show, should the need ever arise, by heating up the hatchet so as to cauterize the severed neck. More recently, I have learned that such sans-tête aerobatics are not restricted to chickens.

Ideas on the Verge

My latest collection of essays is now in print. Some of these essays were previously published here while the rest—probably the more significant ones—have until now remained hidden behind a paywall and only accessible to subscribers. This collection represents a gradual shift of focus. I am still doing my bit as a chronicler of collapse, but what I want to emphasize is that a meaningful and fulfilling life can be lived even in the midst of collapse, which, with the right preparations and the right mindset, can be relegated to its proper use as a particularly macabre form of entertainment.


The book is 244 pages long and contains the following essays: 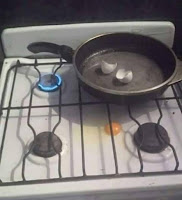 The vast majority of physiologically and psychologically normal people want to be good and to do good. They wish to feel competent in carrying out challenging, complex tasks and capable of carrying them out as an exercise of their own free will. They want to have a sense of agency, a feeling that what they do matters to others. They want to be recognized and respected for their talents and their efforts. They also want to be able to pass along their wisdom and skills, their acumen and world knowledge to the future generations.

Even if all of the above does not result in a high level of physical comfort and luxury but involves hardship and privation, considerable personal danger, and even if many lives are cut short as a result, people can remain happy—satisfied and fulfilled—provided they get to contribute freely to a common cause. When they are deprived of any and all these things, they cease to be physiologically and psychologically normal.

When deprived of any and all of these things, they lose self-respect and interest in their work, and just try to get by, just doing the bare minimum. Some even give up on trying to do the bare minimum and just drift along, helpless and hopeless. They are unable to convince themselves that it is still worthwhile for them to make an effort, convinced that it would all go to waste.

They begin to dress shabbily and stop minding their manners. They lose interest in other people, and especially in the younger generations, feeling that they have nothing to offer them, and that even if they had, their advice would not be heeded and their contributions would not be respected.

As their physical and social environments are transformed out of all recognition, they no longer feel that they belong anywhere and become desensitized to being trapped in a dismal built-up environment full of graceless, utilitarian buildings, run-down infrastructure and hostile or indifferent strangers. Often the result is mental anguish, which drives them to psychiatrists, who in turn prescribe them antidepressants. In many cases, these either don’t work and/or exacerbate the very biochemical imbalance they were intended to correct, cause additional impairments and may drive them to suicide.

Their mental state also negatively influences their immune system, causing it to weaken, making them susceptible to infections, or to go haywire, causing autoimmune disorders and allergic reactions. They project all that is wrong with the world around them onto their own bodies and develop psychosomatic ailments, especially chronic pain, and especially in the one part of the body which is particularly capable of self-generated pain: the spinal chord. In an attempt to alleviate the pain, many of them begin to self-medicate and fall into alcoholism and drug addiction.

This is all perfectly normal and is perhaps exactly as it should be. 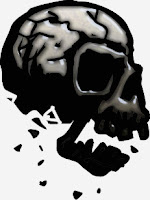 A curious and fraught imbalance has developed between the three major international powers—the US, Russia and China. As the latter two grow stronger and, together with their neighbors, coalesce into a cohesive and cooperative Eurasian whole, the former, sinking into a morass of its own making, is growing increasingly desperate and is starting to act out in ways that are economically and militarily provocative, if not outright self-destructive. From sanctions to tariffs to saber-rattling, the US refuses to fade out quietly. Russia’s and China’s responses to these provocations have been measured and cautious.

Thus, neither China, nor Russia have much to fear from the US in spite of its military and economic belligerence, which is increasing along with the desperation of its ruling class—or should I say its owners. You see, the US is not so much a country as a country club: it’s very much a members-only affair, while everyone else, be they native-born or guests, is welcome to serve the oligarchy for as long as they remain useful. After that they are free to die on the streets as bums.

And the oligarchy has every reason to be extremely worried. Their wealth is primarily denominated in money (this may seem like a tautology, but it isn’t: money≠wealth). In turn, the future value of money is dependent on the future level of economic activity, which in turn is dependent on access to energy that makes economic activity possible. That energy comes primarily from fossil fuels. Yes, it’s all still about oil: no oil—no industry—no money, and a lot of hysterical, angry oligarchs.