The Story of “Er”

[The Unspell Crowdfunding Campaign is in its second week. Over $5k has already been raised, but at this rate it seems unlikely to hit its target of $50k, so please help spread the word.]

Once upon a time Western Europe was a land of clear consonants and pure vowels. People would fill their lungs and shout to each other over great distances—across rivers and valleys—and understand every word. But then, just as one Western European nation after another was embarking on an empire-building campaign, something very strange happened. You see, they had to distinguish themselves somehow, to confuse and frighten each other, but the European Parliament hadn't been invented yet, and so they couldn't exercise their precious ethnic differences simply by talking a great deal of nonsense. They had to achieve the same effect through more traditional means: by distinguishing themselves in manners, attire and speech. In the case of manners and attire their approach was quite traditional as well: they cultivated a pompous and arrogant demeanor, and they sported crazy hats and lots of frills and embroidery. But in the matter of speech the way they chose to distinguish themselves was decidedly strange. I call it the Battle of Speech Impediments.
Read more »
10 comments:

I Need Your Help 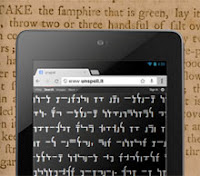 I have been writing and speaking on the subject of collapse for the past seven years. Many people have found what I had to say interesting and significant. Some people have even made major changes in their lives, based in part on insights they were able to glean from my writings. But now I am ready for a major change myself. I feel that I have already said everything I could possibly say on the subject of collapse. My books remain in print, and this blog will stay online, available to anyone who wants to use these resources as collapse unfolds. But I need to take a break.


About a year ago, while overwintering back in St. Petersburg, Russia and helping take care of our newborn son, I conceived a scheme for making written English easier to learn and more accessible to everyone from special needs students and dyslexics to home-schooled children to just about everyone who has ever struggled with the horribly irregular English spelling. This scheme, which I called "Unspell," uses a dialect-neutral phonemic representation of spoken English. I invented a special set of symbols for this purpose. A year of work went into perfecting a system that captures all the significant phonological distinctions of English and that is easy to read, easy to write and easy to learn. Two pieces of software—called “unspell” and “respell”—will convert from English text to this representation and back in a process that is largely automatic, allowing people who have good command of spoken English to read and write perfect English without having to so much as look at English spelling!

While I was writing and speaking on the subject of collapse I was often asked what my qualifications are for doing so. Am I an economist, a historian, an anthropologist, a sociologist? Alas, I am none of the above, and that makes me an amateur. But as far as Unspell is concerned, I have all of the requisite qualifications: I have an advanced degree in applied linguistics, a degree in computer engineering, and well over a decade of experience working as a software engineer, engineering manager and systems architect in a variety of high-tech start-up companies.

I have been able to complete the design for Unspell in my spare time working together with a few volunteers. But now that it is time to develop and deliver software, this model will no longer suffice. I have to register and organize a company, buy software licenses, lease servers, pay contractors and so on. The first step is to raise some seed money, which will be used to put together a demo that can be shown to prospective investors. I hope to raise the seed money this month and to complete the demo during the first quarter of 2014.

And this is where I need your help. Writing and talking on the subject of collapse was interesting and perhaps useful. It was also very time-consuming, and definitely nonrenumerative. I hope that, in recognition of my efforts, you will consider helping me raise the seed money I need to launch this venture, either directly, by donating yourself, or by spreading word of Unspell among people you know. In return, I promise to do my utmost to give you the satisfaction of having helped create a major public good.

To donate, please go to the Unspell crowdfunding campaign at Indiegogo.com.

Carolyn Baker's CollapsingConsciously: Transformative Truths for Turbulent Times is perhaps the most approachable book on collapse you are likely to find. Compared to Jarred Diamond's Collapse, which weighs in at just over 600 pages, Baker's is well under 200. And yet in these few pages Baker manages to tackle a topic which Diamond studiously avoids: Whatever shall we do about the fact that collapse is happening all around us right now?

From the Mouths of Babes

[This week's guest post is by Scott Erickson, who is an award-winning humor writer and the author of a satirical novel titled The Diary of Amy, the 14-Year-Old Girl Who Saved the Earth. I liked it. It is entirely disarming and strikes a good balance between humor and seriousness. There are enough jeremiads and diatribes and rants on this topic out there. Luckily, this isn't one of them because Scott's scathing social critique and mordant wit are delivered via a charming narrative device: a smart, earnest, precocious 14-year-old girl.]

Personally speaking, I think it’s kind of weird that economists don’t tell us about this. So I guess it takes a 14-year-old girl to tell you about it!