150-Strong: A Pathway to a Different Future – Serialisation Part 3

“The more laws and commands there are,
the more thieves and robbers there will be.” Lao Tzu

Information leaked in the Panama Papers about the use of tax havens certainly supports this statement! Under the cover of the law thieves and robbers have been maintaining their privilege and ultra-wealth by being tricky. Many of them are leaders – politicians, monarchs and business executives. “I have done nothing illegal,” they say as their souls disappear a little further into a fog. And from the germ of their example a cancer grows.

Rules work best when they are kept to a minimum.

This I have seen illustrated in the context of the business I am involved in. We are a construction company employing approximately 150 people, a mix from all walks of life – old friends, relatives of workers who needed a job, qualified recruits who fitted the mold, troubled youth recommended by the courts as worthy of a second chance, odd bods and colorful characters who fell into each others' orbits. Some are very skilled and others developing.

Help the world learn about #bureaucraticinsanity

The types of stories reported in Sean Kerrigan's book Bureaucratic Insanity are extremely common, in schools, government and in workplaces. Every week another story emerges in the media of someone being railroaded by the insane bureaucrats that infest the system. But that's just the media; if they reported every such story, they would have no time left over for anything else. And so most people continue to delude themselves that this is all business as usual, nothing special, certainly nothing utterly insane going on.

But it is in your power to change that: if you tweet out the hashtag


#bureaucraticinsanity
along with a short summary of any event you experience, witness or become aware of that has an element of "bureaucratic insanity" in it, that would drive traffic to the term, and to Sean's book. And then more people will learn what's happened to their country, and what's about to happen to them. For my part, I promise to follow the hashtag, sort through the tweets and publish Best of Bureaucratic Insanity compilations on this very blog.

Rest assured, this problem is a serious, widespread, medical issue, but no men in white suits will rush to your rescue, subdue insane American bureaucrats, put them in restraints and haul them off to the funny farm. No, you will have to deal with them yourselves—before they deal with you! And the first step in doing so is to find out who they are and what damage they are causing.

Here's a video clip from RT's show Redacted Tonight, where Lee Camp talks about grandparents imprisoned for failing to return to the county public library a Dr. Seuss book they took out for a grandchild and other such events that have come to typify contemporary America.

Bureaucratic Insanity is Yours to Enjoy 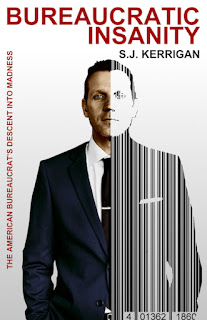 I am happy to announce the release of a new title from Club Orlov Press:

In contemporary United States a child can be charged with battery for throwing a piece of candy at a schoolfriend. Students can be placed in solitary confinement for cutting class. Adults aren’t much better off: in 2011 the Supreme Court decided in 2011 that anyone the police arrest, even for an offense as minor as an unpaid traffic ticket, can be strip-searched. These acts of official violence are just the tip of the iceberg in our society.

The number of rules and laws to which Americans, mostly unbeknownst to them, are subject, is hilariously excessive. But what makes this comedy unbearable is that these rules and laws are often enforced with an overabundance of self-righteous venom. Increasingly, contemporary American bureaucrats—be they police, teachers or government officials—are obsessed with following strict rules and mercilessly punishing all those who fail to comply (unless they are very rich or politically connected).

150 Strong: A Pathway to a Different Future – Serialisation Part 2

[Update: Since none of you got the right answer, here is a hint.

Q: What is the major reconciling force that governs our system of politics and economics today?

A: The profit motive.

When we find ourselves in need of a miracle there is a simple formula that can be applied: “Don’t panic, take stock, and do the next logical thing.” If we apply this formula, hold our course and maintain a positive outlook, the white knight of providence may intercede on our behalf.

That is not to say that the relationship between action and consequence can be avoided. There is no magic wand for the absolution of a life of feckless excess. In the case of our collective consumption binge, we have brought about the sixth mass-extinction event (to add to the previous ones, which are evident in the Earth’s geologic record), we have created a shambolic financial system of gross imbalance, and we have allowed our culture to degrade so far that a figure as flawed as that of Donald Trump has been allowed to become a credible candidate for the position of the world’s supposedly most powerful person. It would be a long way back to some semblance of a reasonable equilibrium.

But we should not give up hope. If we work through our collective karma, we might find that there is the potential for regeneration. 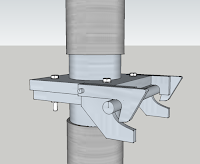 Sometimes delays are helpful because they allow more time for examination, and for rethinking parts of the design. And so it was with the tabernacle design. My initial plan was to use a joint that transferred all of the tension and compression loads into sheer loads on two large bolts, which I called “Jesus bots,” after the “Jesus nuts” that hold helicopter rotors in place. But then Alan, who is designing a boat similar to QUIDNON—a houseboat that sails, but for inland waterways—pointed out that my design would require extremely high precision in the way the components are fitted, or they would start to move and flex under load, and fail. Alan has lots of experience in aerospace engineering, and a keen appreciation for structural elements. What he proposed was two flanges bolted together, connected by a hinge on one side. This approach is very standard: look at your average streetlight, and that's how it's mounted. It is so standard that it doesn't require any interesting structural analysis: one can simply look it up and plug in the numbers. Since the bolts that hold the two flanges together are subjected only to tension loads, they don't need to be fitted precisely, and the math for sizing them is simple.

150 Strong: A Pathway to a Different Future – Serialisation

Capitalism comes with a potpourri of sweet-scented prefixes, all of which presume that there is something wrong with capitalism per se. There are some other prefixes we commonly hear—crony capitalism and unbridled capitalism—that suggest that we aren’t doing it right.

Perhaps it is Goldilocks capitalism we need? Not too mean, with just the right amount of good will and charity, a measured dose of state regulation, a safety net – not too big and not too small, and the rest left to the free market?