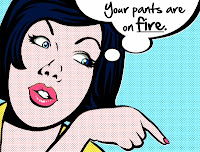 Unbeknownst to most, their brains are a battleground. Those lower down on the intellectual food chain are programmed more or less directly, through a method close to operant conditioning, to engage in status signaling in order to demonstrate their fitness to their peers, mostly by purchasing certain consumer products, while those higher up are manipulated mostly through underhanded uses of language, using a variety of methods, into buying into a fictional narrative and proving their fitness to their peers through virtue signaling. The lower-brow methods of public manipulation, based on television and advertising, have have already been discussed ad nauseam. Not so with the numerous misdirections and fake-outs involving the misuse language: nobody seems to be involved in keeping track of all the major and minor transgressions against our ability to think clearly. Language is what we reason and communicate with, and when the very words we use are twisted and deformed our ability to think suffers also.

Let me walk you through how that’s done.