A new engine for my boat 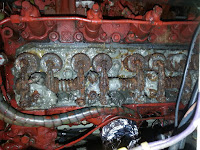 My boat needs a new engine

A Sad Story—but with a Happy End?

Late last year, as I was sailing my boat south for the winter, the engine failed. I had only made it as far as the Cape Cod Canal, and was able to get a tow back to Boston. By then it was too late in the season to do anything about the engine, so I let it sit. This year, when I tried to fix it, I discovered extensive internal corrosion.

It turns out that the raw water pump had blown its seal and had flooded the engine block with seawater. This is a catastrophic failure: when seawater mixes with engine oil, it forms a corrosive emulsion with the consistency of mayonnaise which inundates every part of the engine. Amazingly, the engine can still be fixed; diesels can be overhauled endlessly. But this engine is a 35-year-old antique, spare parts for it are expensive, it wouldn't be as good as new even after a rebuild, and the repair bill would be close to the price of a new, modern replacement engine that is lighter, quieter, more fuel-efficient and much less polluting.

I normally don't try to make any significant amount of money from my writing/editing/publishing activities—because I don't have to: a combination of frugality and resourcefulness is what keeps us afloat. But once in a great while an unexpected expense, such as this one, pops up, and makes it necessary for me to reach out to my many readers for help. I am happy to continue to do what I do at little or no cost to them, provided I can raise the funds to repower my boat. But if I can't, then I'll have to curtail my writing/editing/publishing in order to concentrate on making money to pay off the engine.

The target amount of this fundraiser is the cost of the replacement engine, delivered, with all the options that are needed to make it work with my boat. It does not include the week or two of labor it will take to install it, since I plan to do all of the work myself.

To date, my blog has been read by 1,813,026 people. If each of my readers donated just one penny, that would more than cover the cost of the new engine. But of course most of them will not donate anything, so it's up to you.

The new engine will increase the value of my boat, a venerable Pearson 365 called Prince Kropotkin, by more than the cost of the engine, and when I sell it (as I eventually will) the money will come back to me, and will enable me to give you more essays and books. So, please don't think of it as an expense: think of it as an investment—in me and in my work.