Back in early August I made a very specific prediction as to the effect of US/EU sanctions against Russia:


I see tractors clogging the streets of Europe's capitals and dumptruck-loads of manure decorating the steps of government buildings before too long. 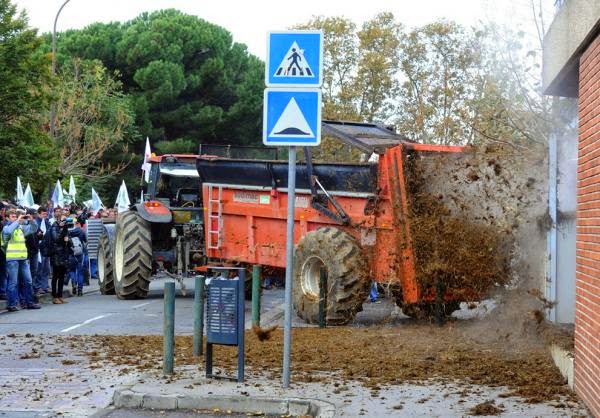 In this case, ”before too long” = 3 months. But in other cases it may be a bit longer. This is, after all, only the beginning. Take this prediction, for example:

I see the political elites and their oligarch puppet-masters becoming endangered species in the United States before too long as the populace, including their own bodyguards, turns against them.

The new controllers of Congress actually think the low turnout meant the people gave them a "mandate" for changing the rules. The fools.

I am not quite sure of what France's relationship is to Russia in the psyche of the average French citizen. I know that Germans of the WWII era tended to be suspicious of Russia. I have had older Germans tell me that you can't trust the Russians "Dem Russen kannst du nicht trauen". Apparently you can't trust them because when you invade them, they fight back. If you project this line of reasoning on the French then the French probably also feel that you can't trust the Russians, assuming that Napoleon's failed invasion still lingers in the collective psyche. Mythology of demonic Russia probably dies hard, especially given individuals such as Stalin, but I suppose that at some point reality has to set in and Europeans will have to realize that resource exporting Russia might be a better ally than resource extracting America. Still, I do not know how much of cold war era propaganda still hangs on in Europe.

This is long overdue, surely inevitable and I, for one, relish the idea, but I hate to think of the forms reprisal may take. Marshall law backed by militarized police departments and curfews enforced by armed drones can be imagined.
As the status quo becomes increasingly intolerable, it's hard to know what to wish for.

***Dmitry:
Sorry about the brainlock. I meant my comment as a direct response to your prdiction about events in the U.S. (I would not presume to opine about Ukraine) Sorry to cause you extra trouble, but please either delete my comment or substitute the following, that makes my intention clear. Thank you. H.S.***


I see the political elites and their oligarch puppet-masters becoming endangered species in the United States before too long as the populace, including their own bodyguards, turns against them.


This is long overdue, surely inevitable and I, for one, relish the idea, but I hate to think of the forms reprisal may take. Marshall law backed by militarized police departments and curfews enforced by armed drones can be imagined.
As the status quo becomes increasingly intolerable, it's hard to know what to wish for.

Skillington: after martial law was the Marshall Plan. Don't conflate them.

JWL:
You must be joking. The fact that martial law happened in one historical instance to be followed by the Marshall Plan has nothing to do with the contingency plans for martial law which the present American powers that be are known to have drawn up, ready for the circunstance that Dmitry has predicted.
I’ll thank you not to make an unwarranted elision of my opinion with something which in no way pertains to today’s conversation.

I understand very little about the relationship of European nations to Russia other than the basic history and geography that I know along with what I get from reading your columns, those of Paul Craig Roberts and those of Steve Lendman. Roberts and Lendman often wax rhapsodic about Putin, and some of their accolades are justified, but Putin remains a staunch supporter of perpetual economic growth, maintaining a non-trivial supply of nuclear weapons and also has no qualms about the aggressive exploitation of fossil fuel resources. Of course these positions are all that you can expect from a leader of a major industrial nation.

I have learned that Gail Tverberg is a wholly unreliable source of information about what Russia is doing and what they plan to do. This is unfortunate, since Tverberg's analysis of resource shortages and related matters is usually scintillating.

In any case, given that Russia is energy independent, there is simply little or no reason for them to be territorially aggressive. This simple line of reasoning apparently escapes a whole lot of people, and of course is conspicuous by its absence in the mindless nonsense that the mainstream media tends to parrot.

Paul Craig Roberts figures that some of the European nations are eventually going to wise up and start to do business with Russia independently of what the USA wants them to do. Whether this is destined to lead to war I simply don't know, but Roberts and Noam Chomsky are worried.

By the way, what is a small, relatively progressive and sensible nation like Denmark doing staunchly standing by the official NATO narrative, which comes from Washington, according to Paul Craig Roberts? Denmark is one of the world's leading utilisers of wind power. What is the basis for their hostility towards Russia?

"I see the political elites and their oligarch puppet-masters becoming endangered species in the United States before too long as the populace, including their own bodyguards, turns against them."

No matter how much I might secretly relish the thought of seeing the Koch brothers dressed in rags and bereft of their wealth, it isn't going to happen. The people in the USA are dumbed-down, drugged, stupid, mollified by fast food and sports on television, concerned more about the price of gasoline than about the cleanliness of the water they drink, corrupted by electronic gadgets, and many are not even smart enough to be confused. Such a populace is incapable of revolution.

Wait until the unemployment rate in the USA makes an alarming rise and then you will see massive demonstrations in public, spearheaded by the idle youth.

I love the French :-) they dumped rotten cabbages in protests weeks ago and the farmers will no doubt continue to escalate the situation until they are appeased.

I feel it is to do with speaking English. The French have their own language and culture, and are less inclined to be indoctrinated by the English-speaking media.

It was after reading some remarkable research about how climate change is portrayed in the media, that I realised just how bad it was. It concluded that only English speaking newspapers would regularly contain articles and opinions from climate sceptics. In fact more space was given to climate sceptics than climate scientists. It was rare to find any pieces by climate sceptics in the non-English speaking press. It is because climate sceptics are such a minority and generally would get little page space, except where there is an agenda to distort the facts.

I sure hope your second prediction comes to pass just as quickly as the first! The Emperors of Rome, supposed living gods lived in constant fear of their palace guards. I wonder if our American Caesars might develop the same relationship with the secret service.

I was born in 1963 in Leningrad where I lived till 1989 before immigrating to the US. I am well familiar with predictions people made about the government functionaries fate after the collapse of the communist system. It sound very much like Dmitry's prediction about the ruling elites of the US. We all know what happened after the fall of the Soviet Union: the whole country was privatized for themselves by the same people who ruined it. There were very few victims among the ruling elites. Most of them reemerged unscathed and lived happily thereafter. Since I like analogies as much as Dmitry loves them I don't expect his prediction to come true. However, as Yogi Berra used to say: Predictions are very difficult, especially about the future.

As I've written many times, USSR was collapse-lite due to superior collapse-preparedness, so the analogy is in this case a false one.

Skillingtoon, you're welcome. Again, you said Marshall law, when I hope you meant martial law. The distinction is was remains pertinent. Please excuse the attempt to clarify w/ humor.

The French take a lot of crap from the Anglophone media, some of it justified, much of it not. But I am learning to have a real respect for them. It seems they are one of the few peoples left anywhere in western Europe who see what is being done to their country by the NWO, and increasing numbers of them are determined to stand up to the Washington/Brussels bullies. Vive la résistance!

Don't worry, the CIA has everything under control...

jwl:
In the last paragraph of his weekly post today Jim Kunstler accidentally wrote "an" instead of "and." (boy, is he stupid) Now you can correct him. That can be your contribution to the discussion.

I believe all of you could benefit from Unspell. Let's leave it at that.