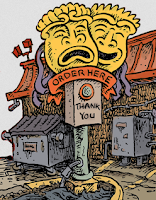 James Howard Kunstler raps with Dmitry Orlov, author of Reinventing Collapse and the forthcoming new book, The Five Stages of Collapse. We delve into some heretofore unpublicized details of Mr. Orlov’s personal history as a young émigré from the old Soviet Union in the 1970s, and his journeys back to Russia (both Soviet and post-Soviet) since then.

Listen to it here.

A delight to listen to. Any faint possibility of a written transcript?

The most surprising bit of information that I got out of the interview was that in Russia you can actually own something outright, like a house or apartment. In America by contrast everything needs to be rented. Even if one buys one's house and no longer has to pay rent to the bank, one still needs to pay rent to the government in the form of taxes. One is essentially forced into participation in the money economy because it is illegal to be anywhere without paying rent to be there.
It would be my hope that in a post collapse society some of the rent collection bureaucracy would go away so that it would be easier to just squat somewhere without triggering the rent collection mechanism. People are of course squatting now, living under bridges and in tents set up in marginal spaces, but they have to deal with being rousted periodically by police.
I am curious to see what sort of living arrangements will emerge in a post-rent-collection era. I imagine that third world shanty towns are probably a good model and of course the migrant gypsy model.

"curious to see what sort of living arrangements will emerge in a post-rent-collection era."

Expect to see various forms of concentration camps. The conditions will vary in terms of the productive nature of the work performed therein. I think "Freedom Camps" would be a nice name for them.