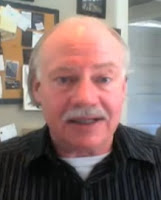 Something funny happened on the way to the management offices of The Nation, and Mike Ruppert's interview ended up in a different YouTube account than the other interviews in the series: ontheearthproduction instead of videonation (which is where the rest of the series can still be found). The internet works in mysterious ways. "Get Ruppert off our intertubes!" said The Nation; and so here we are, in an altogether different YouTube account. But let's not dwell on that.

Splendid! Bracing, indeed. Short, sweet and succinct. It's about time we see an exponential increase in pieces here and there, bits of writing we can't escape, to pound this message hard enough that some actually bubbles up into our conscience. You know, like advertising! ;)

Can't help I still believe in the power of information. And I still believe that it is nothing but a information problem we are dealing with, as information defines energy, not energy the information. Although I must say, when I talk to people I have little hope. But hey, maybe it's just a requirement that the oil ends for that the creative mind kicks in.
There is one thing I don't agree with Mr. Ruppert: money is not energy, money is a communication tool to attribute value. It is not the expression of a energy value. It's only in the system, how things have been legally linked, like the dollar to oil that leads to this impression. But this is only a man made system. It has just to be undone. And I guess it will soon be undone.

And two years from now, if teh Internets tubez are still functioning, we're gonna look back on trivia like Charlie Sheen and wonder "Why were we paying attention to stupid shit like that when so many bigger things were going unnoticed?"

Hello, a long time reader here and many thanks to Mr. Orlov for his insight, humor, and most of all his dedication to pointing out that the emperor is not wearing any clothing.....My question is this: does anyone here know of any groups or organizations in the Big Apple who are actually attempting to prepare for the problems we are facing? I would be very interested in meeting such a group if it exists. I'm trying to find allies who are aware of the dangers and are looking for a way to protect themselves. Thanks in advance for any advice anyone can offer!

Click on my name and leave a comment on any posting on my blog. Perhaps we can meet up at one of these gatherings.

Mike said in the video "those in the shadow of the dam can't imagine it collapse." We are all in the shadow one way or another. Perhaps in the soviet system people did not have that far to fall . If 1-100 are getting prepared for what's coming ( and that figure is high :)we need 2 find the balance between sounding the alarm and being ready to keep our heads down. OPSEC is paramount starting yesterday.

Well done Dmitri and well done Mike for getting the message out to all those who are not brain-dead and are willing to listen.

Keep up to good work. Spasibo.

Couple of points and a question

Swedish scientists say that the radiation from Japan will eventually spread over the entire northern hemisphere.

Cameron was asked in Parliament today if depleted uranium will be used in the coming airstrikes.

That stuff has already blown to Europe from the middle east wars.


Question is, there are plans to turn North Africa into a big solar power producer for Europe. Granted the antipathy towards the likelihood of such things being feasible, are we seeing a step for control of N. Africa in preparation for that? Is that a possible thread?

Also, BTW, here are a couple of public radiation maps with info uploaded from non govenment sources, folk with geiger counters.
They are not heavily used at the moment, but you can maybe pass them on to collapsenet or whatevers.

I am open to all ideas , collapse of USA being one of those, but maybe we are really in a time of turbulence , chaos,resource scarcity, economic decline, but not collapse.
**
Just because the standard of living is going down maybe it feels like collapse but really has a uncomfortable bottom that is not a collapse.

OK, that radiation map seems to be not too good.
This one is a bit better.