The Order of the Arctic Fox

Why the Arctic Fox?

And wherefore cometh he?

There arise occasions in the course of human affairs that cannot be properly characterized without resorting to the strongest possible language. In situations when nothing can be made to work and all has come undone the term “collapse” tends to get a lot of use, but it is too abstract and too technical to do justice to the visceral experience of the event. It comes from the Latin col-labi—to slip together—but the exclamation “Goodness gracious, we slipped together!” just doesn't resonate.

What one is more likely to hear is something more along the lines of “Holy shit, we are totally fucked!” or some other string of obscene expletives, and this rather spoils the solemnity of the occasion. What is called for is a way to ennoble our suffering, not to cheapen it with vulgar expressions.

The connection between the sacred (that which is holy) and the sacral (that which is related to the pelvis and its varied functions) is a most intimate one. Both derive from sacrum, which is an anatomical term: it is the triangular bone in the lower back formed from fused vertebrae and situated between the two hipbones of the pelvis. The word is a Latin translation—os sacrum—of the Greek term—hieron osteon (holy bone)—for the Ancient Greeks believed the sacrum to be the seat of the soul. There may be something to this belief: when we suddenly realize that we may be about to die and as our soul makes emergency preparations to leave the body, we tend to experience a pronounced tingling sensation centered on the sacrum. The entire pelvis also tends to become affected: the anal sphincter relaxes, sometimes resulting in something vernacularly referred to as “losing one’s shit,” and, in men, the scrotum tightens and the testicles retract.

At that point many people also involuntarily utter sacrilegious profanities (there’s sacrum again!) which freely combine references to sex, defecation, genitalia, motherhood and God. Across many languages much use is made of vulgar terms for female genitalia: they form a sacred portal through which all human (and even some divine) life enters this world, and this makes references to them particularly potent in this context.

The holy and the obscene are really one and the same; swearing is a form of prayer and the female pelvis is the altar to which we spontaneously direct our prayers when we suddenly find ourselves in extremis. One often hears that there are no atheists to be found aboard a foundering ship but a lot of cursing/praying to be heard; are these two in some sense not the same?

The need to be vivid and evocative yet polite when referring to financial, commercial, political, social and cultural collapse forces people to resort to euphemisms. One nation that has a recent and profound of experience of collapse is Russia, having lost an estimated ten million people to alcoholism, violence, emigration and despair in the wake of the collapse of the USSR during the 1990s.

Referring to collapse, the Russians tend to make references to “the white furry animal,” thereby indirectly referring to the arctic fox, Vulpes lagopus. The Russian word for it is песец (peséts). It is a polite substitute for the term пиздец (pizdéts), which is reasonably well conveyed by the English exclamation “Holy shit, we are totally fucked!” It is in turn derived from the word пизда (pizdá), which is a vulgar term for female genitalia.

Take this white fluffy animal into your heart, and you will no longer have to wanly banter about collapse; instead, you can now harness the full depth of the sacred and the profane and refer to it as “the advent of the arctic fox” or, if you want to be coy and use a euphemism, you can instead obliquely mention “a certain furry animal.” Those in the know will appreciate this bit of finesse while those who have no idea... well, what of them?

Witnesses to the advent of the arctic fox need a sacred symbol, which I am happy to provide. In keeping with the light-hearted, whimsical nature of the subject, it is a talisman that symbolizes Golgotha, with four crosses rather than the usual three. One cross is, perforce, for Jesus Christ. At the center is the symbol of Death, which Christ vanquished through His resurrection. Two more crosses are for St. Petrov and St. Boshirov, the intrepid time-traveling GRU agents who will have had been crucified together with Jesus, cleverly disguised as the two thieves. And the fourth cross is for your own good self: on it you will be crucified during the advent of the arctic fox but will, with any luck, be reborn into a new life once the arctic fox departs. 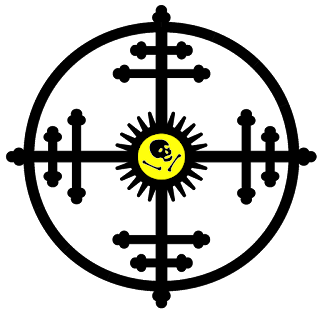 Please order your copy of The Arctic Fox Cometh, available locally wherever Amazon.com has a foothold (now including Australia).