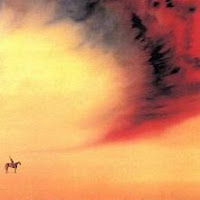 “…[M]any thousands of years ago, long before Buddha Dīpankara and Buddha Shakyamuni came into the world, there lived Buddha Anāgāma. He didn’t waste time on explanations and just pointed at things with the pinkie of his left hand. Immediately their true nature was revealed. He would point at a mountain, and it would disappear. He would point at a river, and it too would vanish. It’s a long story, but the way it ended was this: he pointed his left pinkie at himself, and vanished. All that was left of him was his left pinkie, which his students hid in a lump of clay. The clay machine gun is that very lump of clay with the Buddha’s pinkie inside. A very long time ago there lived a man in India who tried to turn this lump of clay into the most terrible weapon on earth. But as soon as he drilled a hole in the clay, the pinkie pointed at him, and he vanished. Since then the pinkie has been kept in a locked chest and moved from place to place until it was lost in one of the Mongolian lamaseries…”