Failure of Complementarity: from Multiculturalism to Devil-Worship 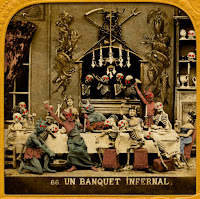 Over the past week there has been a spike of renewed interest in an essay I wrote a year ago, Barbarians Rampage through Europe's Cemetery, in which I described how the steady degradation of the Western countries is being speeded up by the arrival of migrants from incompatible ethnic groups. What provoked this renewed interest was a post by Paul Craig Roberts in which he described my essay as “Europe’s—and America’s— obituary.” I certainly stand by everything I wrote—no matter how many people it rubs the wrong way—but over the intervening year I have done some research that has helped me understand why exactly the Western project has gone off the rails, and it turns out that I have a lot more to say on the subject.