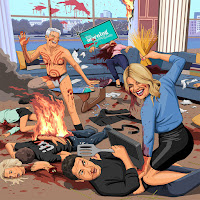 Reality can be harsh. “The best laid schemes o’ mice an’ men / Gang aft a-gley,” quoth Robert Burns. The more ambitious the plans, the harder the gods laugh in our faces when they come to nought. As our struggle to achieve our aims hardens into deadlock, so does our conviction that our cause is righteous, petrifying into a blind faith that is impervious to contradictory facts. Instead of reassessing our aims and reexamining our strategy we simply push harder and harder in the same direction, going by the dictum that if brute force doesn’t work then we just aren’t using enough of it.

But the seemingly impenetrable, fact-proof façade obscures a delicate and vulnerable organism sheltering behind it: every contrary word that gets through causes a wound; every grain of truth becomes an irritant. As the laughter of the gods grows louder, we shut our eyes and plug our ears, and yelloch our sacred slogans through amplifiers turned up all the way to eleven. But a time comes when the reality of our failure can no longer be ignored, and then it is time for a break—a psychotic break.

People who are in denial are not entirely outside of consensual reality. They are just taking a break from it but remain normal semi-social animals and therefore generally conformist: as soon as they see that a critical mass of those around them have come out of denial, so will they. Moreover, plenty of them will pretend to have been in the vanguard of this exciting new trend, for fear of being viewed as laggards. Their path back to reality may be overgrown with the thorns of their self-induced, willful ignorance and strewn with minor and major embarrassments, but it does exist.

Not so with the individuals and the populations that have become psychotic: they inhabit their own imaginary realms, and whatever happens in the real world does not penetrate theirs except as muffled noises and shifting shadows. If reality pushes them too hard they become violent or self-destructive, catatonic or hysterical. For them, a path back to reality may not exist at all. But how can we be sure of this? Looking in from the outside, they may seem relatively normal and simply refusing to pay attention to subjects they find difficult, uninteresting or unpleasant.

Some—especially those who are forced by their circumstances to live on the streets—may find themselves in need of some chemical help in maintaining the firewall between their own world and the real one, and self-medicate with drugs and alcohol. But others—those who are well cared for and have access to medical treatment—may be perfectly content to reside within their own fictional realms, separately or in like-minded groups. They may even be high-functioning, with savant-like abilities, and inhabit prosperous enclaves.

Their psychological problems may surface if they are not sufficiently sheltered—if the safe spaces they inhabit are not safe enough, or if their basic needs are not sufficiently well provided for; but all of these reduce to just one problem: insufficient quality of care. The richer societies can more thoroughly obscure the magnitude of the problem: they have fewer people sleeping rough, permanently drunk, and more people living comfortably on the psycho pharm. In those societies that are humane enough to take good care of their psychotics, the few that are observable in public are but the tip of the iceberg.

Another iceberg floating about is made up of those who are neither in denial nor psychotic. The tip of this iceberg is made up mostly of those who, through a lifetime of experience, have amassed an abundance of insights into the workings of various fields and disciplines; who are lucky enough to no longer be beholden to the corporate, academic or governmental guardians of the status quo (through retirement, academic tenure or being independently wealthy); and who have a penchant for speaking the truth. Thanks to the internet, mass media gatekeepers no longer have the ability to silence them while governments find it problematic to restrict access to publicly available information or to ban expressions of opinion, confining their efforts to issues of secrecy, confidentiality and intent.

But while allowing people to stay in denial (and keeping safe spaces safe for the psychotics) is a major industry, actually informing people about the true state of the world and its prospects is definitely not. It is at best a cottage industry and is really more of an artisanal pursuit. This is because denial sells better: reality is harsh, and it is always easier to sell sweet dreams than sad truths. Plus knowing sad truths can create problems of its own: we are semi-social animals that like to run with the herd, and the more social of us may get sad and lonely when the herd is grazing on one side of a wall of denial while we are stuck on the other.

When eventually reality intrudes and the laughter of the gods at our combined folly grows deafening, we may be cheered to see those around us coming out of denial, somewhat shamefaced but generally amenable to reason, or we may be driven to despair in realizing that we have been dwelling among psychotics and will be spending the rest of our days in Bedlam. There may be ways of finding out which of these it will be ahead of time. For example, in today’s United States, you can find out a lot about the mental status of the population by asking people a simple question: “Who is your president?” If the answer is some insane ranting about Russians—well, there’s your answer!

As sweet as the rare treat to find those who are aware of the situation we find ourselves part of the modern world, the conversation almost never goes beyond commiseration as nobody knows how to step-up and do something. We cannot seem to see a path out towards becoming organized and managing ourselves according to sustainability because we are mired in bills, full-time work, local regulations, distractions and social niceties. I cannot find one fine example of a community in the US, to contribute with that has a purpose or structure that is an appealing and successful alternative to what the status quo has to offer? Either work on someone else's farm or go to endless meetings through consensus on a commune. Until there there are good alternatives put out there that make life better, people are going to be content with the living arrangements of work, voting, taxes, debt and going out to eat.

You know, a long time ago being crazy meant something. Nowadays everybody's crazy.
Charles Manson

Living within a state of mass psychosis is so unnerving as to sometimes cause the supposedly sane to begin to lose it. Unfortunately, those who drank (and swam) in the Kool-Aid will probably remain oblivious. In the so-called United States, it is possible that no amount of shock therapy (not even World War III) will ever wean them back to reality.

Can you talk more about the other tip of the iceberg (the people that are part of the system and know the truth and can afford to speak out)?

I assume you talk about people like retired biologist Frank Fenner that has finally "come out": https://phys.org/news/2010-06-humans-extinct-years-eminent-scientist.html

Of course for every realist there is somebody still dreaming about the stars (like Stephen Hawking for example).

I think that the clearest indication of a state of mass psychosis has been the way in which the western population live in a world of wars (largely of the west's own creation) and somehow believe that they are immune to the consequences of war or that war will somehow (under any circumstances) never occur where they live.

It's gotten a lot worse in the last few months. I'm worried about the election this fall, because I believe the right wing will make major gains. And people on the left will have a break down. I've been hearing people say increasingly violent and polarized statements. Such as that the children in cages are in concentration camps... I stay silent, to not be identified as an enemy later. Not that I am an enemy, but I already see internal dissenters/people who say something offensive by accident/men who dated feminists and any friends or employers who stand up for them are punished viscously with the social death sentence. Also the other delusion I hear every day, is the firm belief that science
and policy changes will save the day! I do feel like I'm in a loony bin lately.

Perhaps all we can do when living amongst and interacting with folk who dont seem to know which way is up, is to pay attention to the quality of our personal relationships and work on them.
I find myself biting my tongue more and more as many of the dear souls I mix with, including members of my family, have no idea of the bigger picture and seem to swallow wholesale the daily nonsense they're fed from the usual outlets.
From bitter experience I no longer try and convince or "educate" head-on; quite rightly my efforts to enlighten came across as arrogance. And it's useless to forward interesting and useful links as none of them seem to have time to read anything - even Dmitry's gems!

But I do gently try and challenge unthinking attitudes and the imprecise language used particularly by the youngsters in my family. For instance: "What exactly do you mean by that?" or "Are you sure about that?"
And asking them to explain something further sometimes exposes their ignorance to themselves
It's not much in the scheme of things but it's all I can do and beats hand-wringing!

@John Bianchini- You right. What is lacking is leadership. Anyone who tries to step up is eliminated, one way or another. But life goes on, no sense in waiting for something that may or may not happen. There's a boat load of places to eat out at.

I wish someone would show me the path back to reality other than total collapse and the resulting forced reorientation.

If someone asks me who my president is, I might say Putin. Not because I'm insane -- more like wishful thinking.