Last Born In The Wilderness Interview #113: America Faded: Syria, Russia, & The Decline Of The American Empire 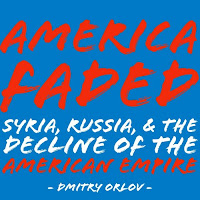 This interview was recorded Sunday April 15, less than two days after the events discussed in this episode. In it we discuss the recent missile strikes by the US military in Syria, the Trump Administration, as well as the broader US military establishment's true intentions and objectives behind the strike, as well as what other major world powers (Russia in particular) are doing in response to this attack.

Dmitry presents this whole event within a broader geopolitical trend: the American Empire is fading. America's influence in the Middle East, in particular, has begun to dissipate, with Russia and other regional players aligning themselves outside of American control and influence. These nations have begun to nudge the United States out of its once dominant role on the international stage, and the response to this missile strike in Syria fits neatly within this trend.

Please listen to the interview.

With so many people having put all the capabilities they've got into fending off humiliation and hiding whatever talents might get them into trouble... It really doesn't make as much sense as you think to talk about not wasting education on dummies.

The trouble is, to see what people are really capable of, you'd need positive (and dependable) incentives for them to show you. So far as poor people tend to rightly distrust the authorities -- who seem in turn determined to dumb them down by sheer malign neglect, situations that offer such incentives are bound to remain far too few.