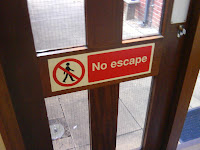 In their stirring rendition of “In the Year 2525” (based on the 1969 tune by Zager and Evans) Laibach predicted: “Rivers of people flow like blood.” But there is no reason for us to wait that long; it is happening already, and has been happening for some time. Already in 2017 over a quarter of a billion people were displaced from their native lands, wondering the globe in search of refuge. Much of this had to do with the increase in failed states. Back in 2013, I wrote:

“The World Bank publishes a list of nations lacking effective sovereignty. In 1996 there were eleven entries; in 2006 there were twenty-six. Not a year goes by that another nation-state does not get shunted to the weak/defunct track: last year it was Libya; this year, Syria. How far behind is Greece?... It is too early to tell whether the increase in nonviable nation-states is linear or exponential, but a simple projection shows that if this trend continues to accelerate at the same rate there will be zero viable nation-states left by 2030 or so.” [p. 150, The Five Stages of Collapse, New Society Publishers, 2013]

Since then, Syria has recovered somewhat, and refugees are going back to Damascus, while Libya is still in chaos. In the meantime, Yemen has definitely joined the defunct column, thanks to Saudi/US bombing and blockade. And the Ukraine is definitely nearing failed-statedom, with a majority of its population either fleeing or living in poverty and with armed groups of nationalist thugs running rampant. Under the careful tutelage of the US government, its Central American protectorates of Guatemala, Honduras and El Salvador remain crime-riddled basket cases, generating a steady flow of migrants, and anyone in the US who points out that perhaps doing something about the huge population of homeless people (especially in California) should take priority over helping strangers from faraway lands get shouted down as racist-fascist-whatever. Venezuela is in full-blown collapse under the weight of US sanctions, while propaganda mouthpieces in the US claim that its problem is socialism. But the rapid progression nation-states toward failed-statedom has slowed down somewhat since 2014, and I think I know why.