The October Revolution and You 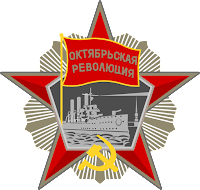 Today is the 100th anniversary of the Russian Revolution of 1917. It caused a lot of death and destruction, which I won’t go into because you can read all about it elsewhere. It also caused a great outpouring of new art, literature, architecture and culture in general, putting the previously somewhat stodgy Russia securely in the world’s avant-garde. It also resulted in a tremendous surge of industrialization, rapidly transforming a previously mostly agrarian, though gradually industrializing nation into a global industrial powerhouse (at great human cost). But perhaps most importantly, the revolution destroyed all of the previously dominant institutions of privilege based on heredity, class and wealth and replaced them with an egalitarian social model centered on the working class.

And it demonstrated (as much through propaganda as by actual example) how this new model was more competitive: while the West wallowed in the Great Depression, the USSR surged ahead both economically and socially. For all of its many failings, the USSR did serve as a shining city on the hill to the downtrodden millions around the world, including in the USA, fomenting rebellion, so that even there the one-percent ownership class eventually had to stop and think. Reluctantly, they decided to stop trying to destroy organized labor movements, introduced state old-age pensions (misnamed “Social Security”) and declared a euphemistic “war on poverty.” And with that a “middle class” was created—so called because it was literally in the middle, having risen out of poverty but still safely walled off from the one-percent ownership class. But as we shall see this effect was temporary.

Eventually the USSR evaporated, as artificial, synthetic political entities often do. The reasons for this disappearing act are too numerous to mention, but one of the main ones was that the Soviet political elite turned itself into a much-hated, privileged caste, and then failed to reproduce, turning into a moribund gerontocracy. When the old cadres finally started dying out, the new generation that came in included plenty of traitors who did their best to destroy the system and grab a piece for themselves. This effect was plain to see, but was it the root cause? When a complex system collapses, every part of it is touched to one extent or another, and it becomes impossible to say which one played the key role in precipitating the collapse.

With the USSR gone, the owners of the USA had no one to compete against and were no longer under any sort of pressure to maintain the illusion of an equitable and egalitarian society. Instead, they concentrated on two projects, one ideological, the other economic. The ideological project involved wrecking what was left of the USSR to the greatest extent possible in order to paint a convincing picture of the horrible consequences of communism or socialism and to herd everyone toward wholeheartedly embracing unfettered capitalism. The economic project involved eviscerating the American middle class—a process that by now has largely run its course.

Since the creation of the middle class was a multigenerational project, so is its destruction. But the effects of this process on society are already plain to see: there is an overhang of still relatively well-off retirees while their children and grandchildren have greatly diminished economic and social prospects. Meanwhile, the hastily erected scaffolding that created the appearance of egalitarianism has been knocked out. Organized labor is all but finished. Borders have been thrown open to foreign labor and cheap imports. Entry into the middle class has been blocked through a variety of measures including the relentless dumbing down of public education, the equally relentless overpricing of higher education, the health care extortion scheme, the rationing of justice based on wealth and privilege, wealth confiscation using a succession of artificial real estate market bubbles and so on. Overall, the former middle class is being whittled down to nothing the same way that the Chinese “coolies” were dealt with once the railroads had been built: don’t feed them much but give them plenty of opium (now being grown in Afghanistan under the watchful eye of Western troops). To sum it up: if you aren’t happy with the way things are going in the US, you have a choice. You can of course blame Russia—for getting rid of the USSR. Or you can blame your owners—your one percent—who have owned you ever since the King of England appointed the Lords Proprietors. 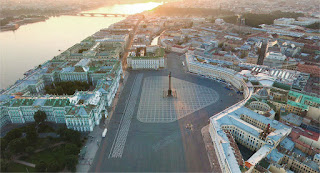 Within Russia itself the commemoration of the October Revolution is no longer a public holiday. But there was a sort of commemoration held on the vast Palace Square in St. Petersburg, which I attended with my five-year-old son on my shoulders. It was his first time in a crowd of 35,000, and he was duly impressed. It was a light-and-sound extravaganza consisting of two shows which played in alternation. On the vast semicircular facade of the General Staff building was broadcast a multimedia retrospective of the October Revolution that included the reading of historical documents (such as the abdication of Nicholas II) and works of poetry. It ended on an upbeat note—yes, many horrible events took place, but Russia is now reborn—with the General Staff’s façade painted in the Russian tricolor.

A different show was presented on the façade of the Winter Palace across the square. Here, multimedia artists from across Europe (including France, Italy, Spain and Poland) used projected light to decorate and transform the palace to music that sung praises to the beauty of St. Petersburg. The audience was invited to use their phones to vote for the best one. 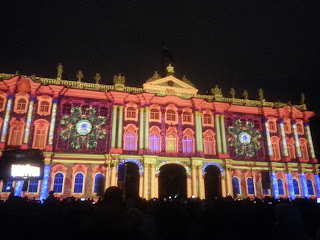 After the show, as we filtered out of the Palace Square and walked home along the Palace Embankment, my five-year-old son asked some good questions that he had formulated while watching the show. “Did a lot of people die?” (Yes.) “But Russia was then and is now?” (Yes, Russia has been around for a 1000 years and will probably be around for 1000 years more.) “Why do people have to die?” (Because otherwise we we would be full-up with useless old people and there wouldn’t be enough room for young people.) And then the obvious follow-up: “Why are we full-up with useless old people anyway?” (???) And finally: “Why do we bury dead people?” (Because they smell really bad.) “Ah…” A rather unsentimental youth, wouldn’t you say? But he was only one of the thousands of quite similar-minded ones who were in attendance that day, riding on their fathers’ shoulders or marching along. Welcome to Russia…

One of the reasons why the USSR failed was because the idiocy of the ideology of Soviet communism became too painful to tolerate. In a sense, this was inevitable. You see, ideology is a product of intellectuals, and intellectuals tend to be idiots, making “intellectual idiocy” something of an oxymoron. We are born equipped with MonkeyBrain 2.0 that can handle abstraction only too well but always fails when attempting to reconcile it with messy physical reality. And so it would be a grave error to think that, just because communist ideology is idiotic, capitalist ideology is any less so. By now most thinking people realize that capitalism has failed just as communism had. We can only hope that one day the US will do with its capitalist legacy what Russia has done with its communist one: turn it into a festive art installation that both children and adults can enjoy.

Another nitpick: In the last paragraph, did you mean either "ideological idiocy" instead of "intellectual idiocy," or "redundancy" instead of "oxymoron?" I think either one of those would make more sense.

Great post, and I really enjoyed this past Thursday's also.

Thank you for yet another of your informative, clear and timely observations.

Hi Dmitry,
A friend more knowledgeable about the Russian Revolution than me pointed out that the women got the vote in the U.S. because they had received the vote in post-revolution Russia, creating an embarrassing contrast.

If you'll indulge a few comments regarding "Shrinking the Technosphere:" Reading your book made me realize that technology is more than merely "not neutral." It's part of an all-encompassing system of values (or disvalues.) It also enlarged my ythinking about authority. I used to think that legitimate authority rested on competence, character, a dash of charisma and convention (someone designated for a particular task, like a police officer directing traffic.) That's fine as far as it goes (e.g., you should grant car-repairing authority a trustworthy and competent mechanic) but it doesn't go far enough. Suppose there are two ways to do things, with one way being simple and based on common knowledge and the other way being complex and based arcane knowledge. If we're being forced to adopt the second way, then any authority based on it--even if competent in terms of the arcane knowledge involved-- is illegitimate. The section on tolerance of looser sexual norms was also very revealing. There is such a thing as doing the right things for the wrong reasons, so even if we do support tolerance we should make sure it originates from within us and not from the technosphere. I hope our propensity for tribalism can come to be based on a shared set of values or a of mission rather than physical characteristics. (Think of a multiracial "band of brothers" in war, all of them competent and all of them willing to take a bullet for each other.) Like you, I'd like to retain technology, the right kind that gives us Beethoven without the b.s.

Another great essay. I am part of the retired overhang you mentioned and it is sad a lot of young people no matter how hard they work will never live as good as I do when they get old. I do not believe there will be a Revolution. I believe the System will have to collapse before there is any change. I have another 24 years before NY Life says I will die, so I will probably see the collapse. I would not be surprised that Jeff Bezos of Amazon cashing in 1.1 Billion dollars of Amazon stock starts the collapse.

I always wondered when the Soviet Union fell that the US didn't just disarm, relax and get back to work making a prosperous society. It seemed a relief to me to not be at "war", even a cold war with, with the USSR. Now I know why we didn't. Thanks Dmitry.

Muchas gracias..... one of your most enjoyable posts ever. Here is hoping we share a anchorage in Fiji. The southern hemisphere is increasingly the seeming last refuge of fools and romantics.

What do you say about the "ideological idiocy" of a world Capitalist system with one billion un or marginally employed people ? Addicted to Militarism, and with a distribution of wealth that would shock kings and pharaohs ?

I don't know how these three men, and the other few super rich clowns on Wall Street, get away with it. They don't even have a royal bodyguard, as far as I know.

Your son's questions are very mature for a five year old. My own daughter asks many questions about inequality in our society, and the answers I give her make her sad, but any other answer would be a lie.

I am a regular follower of your blog. Every time I come here I am enchanted by the way you present the history so effortlessly. This one on the Russian revolution is just the best I have read anywhere. Thanks again for such a detailed, simple to understand and precise post. Loved reading this!