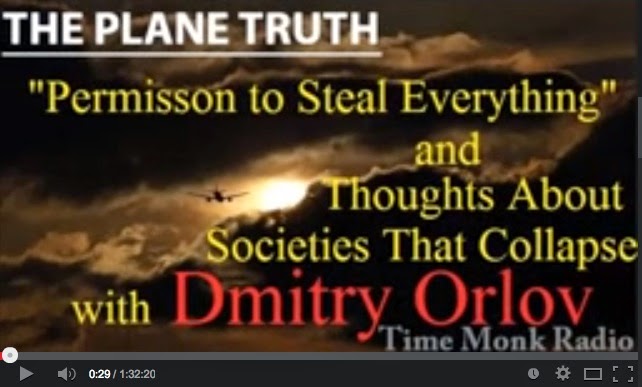 Don't underestimate Israel:) We have RU, CN & IN as alternative allies. And even ISIS has the sense to not attack Jerusalem.

Life in the country club of the great American Satan gets crazier and crazier.

Before the new reality of American impotence and poverty is acknowledged the U.S. Government is going to be very dangerous. What you say explains what is going on very well. Particularly in Ukraine.

As we pass through the gate of gut wrenching change evidence stacks up that our leaders of the old order are stupid, careless, and fearful of appropriate change. Fearful to the point of paralysis and taking impulsive inappropriately-conceived actions. We are indeed in a time when the U.S. is at it's most dangerous.

Dangerous both internationally and domestically. With police resembling military combat units across America stupid and careless mistakes will be made as they control dazed and confused herds. Strife is in the future. You tie it together well.

You make collapse less daunting and your interview is a calming nostrum for all those with nerves frazzled by the spectre of unwinding collapse. The understanding you give melts away inappropriate hope and dashes unreasonable fear. A calming must listen for those wanting to find peace in the maelstrom of change. A maelstrom where the fundamental assumptions on which modern life is based is now proved, with a vengeance, to be wrong.

I think it's pretty obvious why there's so much fascination in the USA with "zombie apocalypse". So very many people already are zombies, and when something happens that takes out the techno-structure of society, such people can only act in mindless, senseless ways that make the situation much worse. I try not to think to much about what exactly will happen when that day comes.

Dream on Raziel, on your way to the bin of history where apartheid vanished. The future of the Levant will be Greater Palestine, with tolerated jewish minority as full, equal citizens - if you're lucky. You'll discover that once the US stops sustaining you, no one else will see any realpolitikal point. And the Israeli Fail Force, even with all those nukes, will make no crucial difference. Israel delenda est...

Boy that interviewer was a real piece of work. What a dummy. Didn't know much about you, your work or anything else apparently. And (unlike the malarkey-spouting clowns on Fox or CNN) couldn't cover up his ineptitude.

I kind of feel sorry for you, having to carry a stooge like that. He seemed to be in a daze.

Sorry for irrelevance to posting but I thought dmitry would have interest.

Love your insights, sense of humor, and intellect. Your courage in to putting yourself "out there" is to be admired. I especially like your perspective on peak oil and peak everything. However you always lose me on several recurring implicit themes of yours which might be boiled down to: "American Empire=bad, Russian Empire=good," "Russia survived collapse, America will not," and "the largest economy in the world (the U.S.) became that way because of historical circumstances and luck and is the only indispensable economy in the world." Respectfully, it sounds like the perspective of an expat who hears the siren song of his forbears of a land that he doesn't actually live in. You certainly seem to have the Russian soil in your blood, but not the soil of your brief land of exile. Respectfully, Kyle Elsbernd Wisconsin USA

I take exception to your "boiling down" my message and putting words in my mouth. I know both US and Russia equally well. Your characterizing Russian Federation as an empire shows your blindspot. If this is how you think, then you are wasting your time listening to me. Go do something else.