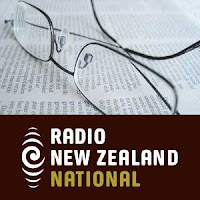 Russian-born and now resident in the US, Dmitry Orlov has a theory that the United States is heading for collapse just as the Soviet Union did — and for the same reasons: a severe and chronic shortfall in the production of crude oil, a severe and worsening foreign trade deficit, a runaway military budget, and ballooning foreign debt. He talks to Chris Laidlaw about what he calls ‘The Superpower Collapse Soup’.

At the end of the interview, I misspoke when Chris basically asked me whether I was pushing Green agenda (NZ Green party polls in the single digits). I should by now be used to interviewers' attempts to pigeonhole me and marginalize my opinions. What I should have said is this:

Any resemblance between what I might advocate and a political agenda (Green or otherwise) is purely coincidental. Green politics is still politics, and politics of any stripe has precious little to offer when it comes to surviving collapse. Politics is at best a distraction, and has the potential to make a bad situation much worse. In the aftermath of a collapse, politics can lead to civil war, ethnic cleansing and genocide. I am particularly opposed to the attempt to coerce people into a one-dimensional "political spectrum."

On the other hand, Phillip Adams of Radio Australia actually called me an anarchist (but was kind enough to cut that bit out of the program prior to broadcast). The NZ interview was broadcast live. Oh well.

I could not agree with you more. Politics is not the thing, it's irrelevant after a certain point of deterioration has been passed. A pointless game. Of late, when I do turn on one of the evening cable news programs, I have the feeling of witnessing something truly pathetic. Kind of like watching a blind guy waving a pistol...

Dmitry, you might want to call yourself a radical humanist. That was the term applied to your intellectual forefathers Leopold Kohr, Erich Fromm and Ivan Illich. There will never be a party of radical humanism, for reasons both trivial (the corruption of the term "radical" by propagandists) and serious (the fact that humanism doesn't sell).

Let me add that Fernand Braudel would surely recognize you as a brother.

Someone wrote in to say that she doesn't "get me," that the US will fight for oil and win (a notion I've dismissed elsewhere) and that publishing comments such as hers would constitute "proper discussion."

Here is an interesting question: why is it that the strength of one's opinions is so often inversely proportional to one's level of understanding?

"Someone wrote in to say that she doesn't "get me," that the US will fight for oil and win (a notion I've dismissed elsewhere) and that publishing comments such as hers would constitute "proper discussion."

Well, to look at this on a less than planetary level, i.e., in terms of "nations", is extremely foolish. In fact, it is a deranged view. Fight and win? I guess the mask came off in that one! The one superior people will rob everybody else in order to keep its privileges...

Some people make the case that hangs them without any help!

That's not true. Failure to thrive economically and inability to secure further financing doomed both empires more than anything else.

A great ironic line posted in the comments section of Kunstler's blog, where he says "Entropy is a harsh mistress.":

"There will be a war against entropy."

LOL! This summarizes it all, folks. Add the War on Physics to all the other slogans (and wars).

If it is any consolation I listened to that interview live and I heard the reluctance in your voice when Chris asked you about the similarity of what you advocated to Green policies. It did not, in my opinion, detract from your views at all. Perhaps the proof is that I have been exploring your blog since that day and I don't call myself a Greenie.

Dmitry - The interview was only 19 minutes long so there was only a so much you could say. You came across well and I think the interviewer Chris Laidlaw found your perspective quite fresh. For anybody who wants to listen the podcast version is still available here:
http://www.radionz.co.nz/national/programmes/sunday/20091115
Right click on the mp3 link and save link as.

Following the interview I emailed the Sunday Programme people at RadioNZ and asked that they invite Dmitry back. Dmitry, I hope you'd accept an invitation if another is forthcoming. Great to hear you live!

I thought you were lucid, clear and thoughtful- just like I expected you to be from reading your blog and Reinventing Collapse. Any other books in the pipeline? (no pun intended).

I was pleasantly surprised to hear you on the radio that morning! Note that although the Green Party in NZ might not do terribly well in the polls right now, under the system of government we have here they do frequent get a number of representatives into Parliament and can wield some influence, so asking someone if they are green does not necessarily imply some whacked out neo-hippie agenda that only a tiny percentage of the population would agree with ;)