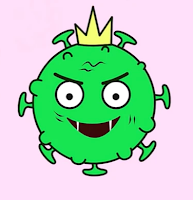 [Warning: Anyone who makes racist remarks about bat-eating troglodytes shall be banned.]

The year was 2040, and the global coronavirus pandemic was in its 20th year. A young couple was on a date, walking together. They did not hold hands, embrace or kiss but maintained a distance of at least one meter between them and wore eye protection and face masks, as prescribed by law. It had been a long time since they were able to meet, because one or the other of them had a cough, or sniffles—a seasonal allergy, or perhaps a slight cold—and such symptoms made it necessary for them to exist in complete seclusion, their food and other necessities delivered by robots. Pale and weak after their lengthy period of isolation, they strolled and squinted in the bright sunlight, in the recently sanitized, secure space of the promenade, in full view of security cameras, and listened to the shrill high-pitched squeaks emitted by a loudspeaker system that were intended to scare away bats. They were at all times being chaperoned by AI software which sounded an alarm whenever they came too close to each other or, God forbid, actually touched.

The young couple had something important to discuss: they wanted to marry and have children, but were unsure if they could ever raise enough money for the lab tests on the sperm samples (to rule out viral contamination) and the artificial insemination procedure, made necessary by the prohibition against any direct, unsupervised sharing of bodily fluids. There was also the fear that the lab tests would produce a false positive or discover real viral contamination—an event that could result in them being committed to solitary confinement in a hospital that would last for as long as it took for them to be certified virus-free.

They were both young—born just as the pandemic hit. Having known no other life, they considered their situation and this way of living perfectly normal. What they had been taught about life before the pandemic filled them with horror: How could people have been so careless?—touching, not wearing face masks, walking close together, sharing bodily fluids… Clearly, they thought, given such recklessness, a pandemic is exactly what such people deserved! They were glad to be living in a more enlightened age.

To add to the horror, they knew that such recklessly unsanitary people still existed! Jokingly referred to as “the bat-eating troglodytes of Wuhan,” they dwelled outside the high concrete walls that surrounded the relatively coronavirus-free compounds, where they grew food and raised pigs and chickens. Since such activities inevitably exposed them to numerous potentially dangerous pathogens that are found in nature, they were considered highly contaminating, and all direct physical contact with them was strictly forbidden.

In spite of all these restrictions, it could be said that this young couple was happy, the way young couples in love often are regardless of various vicissitudes. But this couple was particularly happy because all of these precautions made them feel perfectly safe and protected. There were, however, some worrisome questions that cast a long shadow on their bliss. They did not dare to voice them, first because they were so uncomfortable that voicing them would instantly make their relationship awkward; and second because, if overheard by other people, they would consider even raising such questions to be something like a thought crime.

“What if the dreaded coronavirus didn’t actually exist? Or what if it had existed 20 years earlier, but had since burned itself out? Or what if the virus was still around but was no longer dangerous to anyone except the extremely sick, who would die anyway? What if there was no longer any real danger to motivate maintaining all of these various restrictions and precautions. What if they stayed in effect out of an increasingly irrational phobia that had become so ingrained that a wide range of compulsive behaviors and rituals became necessary to avoid triggering it? What if their obsession with hygiene was itself an illness?”

It would have been hard to tell whether the bat-eating troglodytes who dwelled outside the high-security perimeter were any happier. Their lives were shortened by lack of hygiene and good medical care, and once in a while some of them got wiped out, together with their flocks and herds, when a particularly virulent swine flu or avian flu would make a periodic appearance. On the plus side, it was unlikely that they spent much time or effort engaged in a wide range of compulsive behaviors to avoid contagion, or obsessing over whether such compulsive behaviors were justified.

The last constituency whose happiness we must perforce consider is, of course, the viruses. It is certain that our young couple and their cohort, what with their slavish adherence to extra-good hygiene, made viruses quite miserable, perhaps driving some of them to outright extinction. The troglodytes, on the other hand, probably made the viruses quite happy: instead of exterminating them, they naturally worked out a convivial arrangement with them. After all, what makes viruses happy is same as what makes all living things happy: being able to be fruitful and multiply. Making people feel too sick to go out in public is not really on strategy for a virus, although making people want to go out in public but cough and sneeze periodically is an excellent idea for a virus that wants to spread its progeny far and wide. Making people seriously ill, never mind killing them, is something that only the rudest, most undisciplined viruses do, usually because they are new at it, having recently made a jump from animals to humans. Luckily, viruses are reformable: we punish them by quarantining the sick and reward them by letting the healthy mix their bodily fluids.

This story is based on a plot for a film which Karen Shakhnazarov, head of Mosfilm studio, proposed last night, in an offhand, half-joking way, during a live television appearance on Vladimir Solovyov’s late night comedy program “What the fuck is wrong with the Ukrainians?” My preferred genre for telling Shakhnazarov’s proposed story would be as a musical comedy. Which role would you prefer to play? One of the young lovers, perhaps? The tension from the not being able to touch, setting off an alarm whenever they come any closer than one meter, would be delicious! Or would you prefer to join the merry troupe of troglodytes with their lively pantomime pigs and chickens coughing and sneezing up a storm? Or perhaps a more suitable role for you would be as one of the viruses? You would get to wear a corona (crown), sing in a chorus and also get to perform in one or two memorable song-and-dance numbers.

Please support this writing... [on SubscribeStar] [on Patreon]