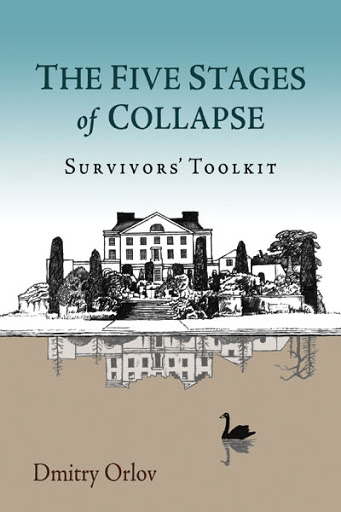 This book is based on the identically titled article I published on this blog in February of 2008, just as financial collapse was starting to gather steam. Since then, this article has been read nearly 100,000 times on this blog alone (it has been reposted on many other web sites) and it is its enduring popularity that has convinced me to write a book-length treatment.

In this article, I proposed a taxonomy of collapse, splitting it out into five stages—financial, commercial, political, social and cultural—and tied each of the five collapse stages to the breaching of a specific level of trust, or faith, in the status quo. Although each stage causes physical, observable changes in the environment, these can be gradual, while the mental flip is generally quite swift, because it is something of a cultural universal that nobody (but a real fool) wants to be the last fool to believe in a lie.

Stage 1: Financial collapse. Faith in “business as usual” is lost.

Stage 2: Commercial collapse. Faith that “the market shall provide” is lost.

Stage 3: Political collapse. Faith that “the government will take care of you” is lost.

Stage 4: Social collapse. Faith that “your people will take care of you” is lost.

Stage 5: Cultural collapse. Faith in “the goodness of humanity” is lost.

A casual perusal of history books will show that these various stages of collapse occur with great regularity. Unlike other animals, humans have a marked tendency to form complex social hierarchies which never endure because collapse is programmed into the very nature of complex social hierarchies. In fact, the first three stages can often be viewed as healthy developments.
For instance, a prompt collapse of the current financial/commercial/political scheme, which is wedded to the fatally flawed concept of infinite economic growth on a finite planet, would be most welcome, for it would give humanity a new lease on life—by leaving to the future generations a planet that is less than 100% despoiled and poisoned by industry. There are countless books that describe the predicament of industrial civilization in accurate and compelling detail, but they ruin the effect by containing certain telltale turns of phrase: “Unless we...” and “We must...” This book is not one of them. Here, the reader is being asked to take it as read that collapse will occur, and, instead of wasting time on what “we” must “do” about it, describes what each stage of collapse entails and what adaptations and coping mechanisms have proven effective in attempting to survive its consequences.

The description of each stage of collapse is accompanied by a case study that details what a successful adaptation to that stage of collapse looks like:
In the interest of avoiding misunderstandings, it bears repeating that this is not a “Unless we...” book or a “We must...” book. If you are looking for a book that will tell you how to keep nine plus billion people alive in a carbon-neutral way, you are bound to be disappointed. Also, this book is likely to test the limits of your mental comfort zone, because you will, in the course of reading it, discover that the people who stand the greatest chance of surviving collapse do not resemble you socially or culturally. You might find it difficult to find common ground with them, or to respect them, initially. But looking back upon yourself, it may occur to you that you don't stand much of a chance if you remain who you are, and that you yourself would do well to try to change your outlook, your habits and the company you keep. You might even find yourself taking a small yet significant first step in that direction; and if you do that, then this book will have achieved its purpose.

Email ThisBlogThis!Share to TwitterShare to FacebookShare to Pinterest
Home