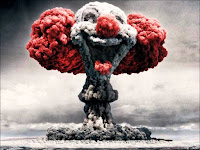 Those who consider the protests and looting that have been occurring in the US, and in US-aligned countries over the past week or so have been frustrated in their effort to come up with a convincing rationale for them. The quest for justice spurred on by a particularly picturesque heart attack death of a certain violent criminal and drug dealer after being choked out by a policeman is certainly one, but it doesn’t motivate the subsequent violence or the looting. The theory that the Democrats and the Deep State are fomenting unrest in order to prevent Trump from winning a second term is a nice one, but what’s missing is any cogent explanation of why an economically devastated country would be more likely to vote for senile old Biden than for an amusingly random yet implacably forthright Trump, who called for the restoration of law and order by any means necessary including the introduction of Iraqi occupation-style military patrols but was thwarted by liberal Democratic governors, congressmen and even the Pentagon. By the time the election rolls around, many people would perhaps be ready to concede that the restoration of law and order by any means necessary is just the thing to vote for.

As with the coronavirus hysteria, where virtually every developed and semi-developed nation imposed arbitrary travel restrictions, ruinous business shutdowns and various futile quarantines and safety-themed public masquerades in response to a new respiratory virus that is less lethal than some recent seasonal influenzas and is selective in killing only those very old or very sick, who would soon die in any case, the reasons for taking these actions were in each instance quite different from those that were publicly stated. Specifically, the rationale that shutdowns and lockdowns would save lives is hollow given the number of lives lost because of ruined livelihoods, the various pathologies caused or exacerbated by the lockdowns and the social isolation and loss of access to regular medical care as hospitals scrambled to battle the new phantom menace.

More defensible rationales can be offered for the steps taken by various countries. As I had explained here, https://cluborlov.blogspot.com/2020/05/gaslighting-coronavirus.html China, then Russia took this crisis as an opportunity to mobilize against a US bioterror attack (all those biowarfare labs the Pentagon has built all over the planet couldn’t be for nothing at all) thereby making such an attack less likely to be effective against their own populations and more likely to boomerang on the Americans themselves. In the US, the extreme, economically destructive measures could be rationalized as partisan attempts to dethrone Trump by making him appear indecisive and feckless in the face of a dire threat. Other indecisive and feckless national leaders could be said to have meekly followed the advice of the World Health Organization, which is mostly owned by the vaccine mogul Bill Gates, formerly of Microsoft, who was very interested in locking down the entire planet and making everyone buy an expensive and unnecessary vaccine—against a virus that happens to be a reasonably safe and effective inoculant against itself. This plan doesn’t appear to be working. A few days ago, as I watched the evening news on Russia’s Channel 1, I was startled to see a 10-second clip of Bill Gates, spliced in à propos of nothing, in which he appeared to be podcasting from his lair aboard Starship Microclusterfuck while blasting off toward Andromeda, during which he glowered and croaked out the news that of course his new (nonexistent) coronavirus vaccine would have to be made available to everyone.

But what is the single explanation for all of these different responses? I believe that the coronavirus hysteria was a crisis response unleashed by the technosphere, which I define as a global emergent machine-like intelligence composed of unwitting human moving parts that mindlessly pursues an abstract teleology of total control. In this instance it is being forced to confront the immanent demise of the fracking industry in the US, the consequent looming global energy shortage and the definitive end of global economic growth which is, in turn, required in order for global capitalism to function. In response, it attempted to salvage what it could of the global economy by splitting it up into separate technological zones, some of which could then be cut off from energy flows and allowed to wither. In desperation, it latched onto the coronavirus scare as a means to lock down national borders, disrupt supply chains and to force nations and groups of nations to self-isolate from each other and within themselves.

And what is the single explanation for the protests, riots and looting currently happening all across the US? I believe I can offer one here as well. Most surprisingly, it is, of all things, a matter of theatrical genre.