As a biological weapon of mass destruction, 2019-nCoV isn’t particularly good. On the plus side, it is highly contagious and can be spread by infected individuals who are not showing any of the symptoms, such as fever and shortness of breath. On the minus side, the mortality rate is a mere 2.1% and is likely to trend down because this rate does not account for a potentially huge number of young, healthy people who contracted the virus but never developed any symptoms, were never tested for it, and will never know that they had survived it. For a virus to be potent as a bioweapon, its kill ratio needs to be optimized for killing the largest possible number of its victims, but doing so slowly enough so that the victims don’t die before they have a chance to spread the infection.

Another minus: the average age of those who succumb to it is around 65, making it rather ineffective in impairing the productive capacities of a nation, be they industrial or military, since many of those who die are past their peak productive years or retired. In fact, taking a rather cynical view, this virus could be rather helpful in reducing the burden of economically unproductive sick an elderly people who, in an aging Chinese population, and given the respect Chinese society traditionally gives to its elders, consume a growing share of the country’s resources.

On the plus side, those who succumb to it are predominantly Chinese, male and elderly, and this may be taken as an indication of some very clever targeting. In fact, the selectivity of this virus may be indicative of an effort to selectively take out members of the Chinese Communist party, in order to destabilize China politically, to effect regime change there and to impose US-style Freedom&Democracy® upon the hapless Chinese population. Given that the US no longer has the military might to take on China (and can’t even respond to Iranian rocket attacks on its military bases), and given that the US has pretty much lost the trade war against China, a biological weapon may be the only arrow left in its quiver.

Let’s keep in mind that the Pentagon has built quite a number of facilities around the world that research various pathogens. Given that this is the Pentagon, whose basic task involves killing people, not the World Health Organization, it seems likely that they also do something along the lines of developing effective biological weapons. A couple of years ago US operatives were caught collecting DNA samples from the Russian population and were promptly escorted out of the country.

The obvious supposition is that these samples were to be used to develop biological weapons to specifically target the Russian population. I suspect that the specialists charged with this task were most disappointed to discover that the vast majority of the Russian population consists of just your regular white people, pretty much the same the world over, and to target them is to target themselves. But that is not the case with the Chinese, whose genetic makeup is more distinctive. This is all clearly inconclusive, and it may very well be the case that the Pentagon’s biological weapons program is just another part of its giant money-burning machine, or the case may be that it actually does produce a biological weapon now and again, and that 2019-nCoV is the meager result it has so far managed to produce.

But then again, the way the epidemic started is not what you’d expect if an artificial strain were released at some place and time. In that case, you’d expect an instantaneous spike in infections, with symptoms showing up in a tight cluster right at the end of the incubation period. But instead what we saw was sporadic incidents of infection connected with a certain fish market in Wuhan gradually giving rise to an epidemic. This suggests that the source of the virus is a natural one, such as the bats which were sold at this market. However, the Chinese have been eating bats for thousands of years (bat soup is a delicacy), so why would this virus only emerge now?

The reason for the timing may simply be increased contact. The virus emerged right around the Chinese new year. According to the Chinese calendar, this is the year of the rat, and while the Chinese also eat rats, bats are preferred. Also, around two-thirds of all the pigs in China have recently been lost to swine flu, driving up prices of pork and also, incidentally, forcing China to start importing pigs from the US, which were previously subject to an embargo. This made the naturally abundant bats an attractive alternative to other sources of animal protein. Equally serendipitously, China’s chicken population is now being ravaged by avian flu, and this, as you might expect, will force China to start importing chickens from the US as well.

Of course, this is all highly inconclusive, but a view may be taken that all is fair in love and war—and trade war with the US especially. But what has set off a few alarms in my head was the reaction to the coronavirus epidemic, both in China and in the West, the US especially.

First, the Chinese government has treated the epidemic as an act of war, deploying all the means at its disposal, including the military, in order to contain its spread, building several large new hospitals, putting entire huge cities under quarantine and extending the national holidays. The response as been far beyond what this virus seems to warrant, with its low mortality rate. Without saying so, the Chinese government has treated this epidemic as an act of biological warfare—perhaps as a dry run for a more lethal epidemic that may come in the future. At any rate, the Chinese government is seeing to it that nobody can blame it for not taking the problem sufficiently seriously, or not doing enough about it.

Second, the Western media response has been an exemplary effort to produce a panic and to smear China, making what is happening there into a horror story. Not only did the mass media outlets do their best to stoke mass hysteria about all things Chinese, but various bloggers and independent “experts” pitched in to produce a panic. There seems to have been a policy-driven reorientation from Russophibia (where it has been high time for the US to silently admit defeat and move on) to Sinophobia (where the US is yet to have its ass handed to it on a plate). Those notionally independent commentators who are exploiting this opportunity to attack China are acting as useful idiots in this centrally choreographed media campaign.

Third, the White House has recently requested that experts look into the possibility that 2019-nCoV has been genetically engineered. It is often the case that the person who shouts “Catch the thief!” the loudest happens to be the thief himself. I suspect that the next move will be to declare that this virus is indeed an engineered biological weapon developed by… why, Russia, of course, and Mr. Putin personally.

Taking all of this into account, the scenario that seems most plausible to me was that this virus was genetically engineered in one of the Pentagon’s biological weapons laboratories and introduced into China via infected wild bats, having picked the technology and manufacturing mecca of Wuhan as a target. The ultimate goal, one might surmise, is to induce US corporations to repatriate production to the US mainland in order to “make America great again.”

But my suspicion is that this isn’t going to work. The Chinese government will succeed in stopping the epidemic, in the process demonstrating that it cares about its people and is effective in protecting them. Already the infection rate, plotted on a log scale, is starting to slope down from a straight line, meaning that the epidemic is losing steam. And then, working alongside many other countries, China will move on with the main task of eradicating the other parasite—which is the United States, a country that get something for nothing simply by printing dollars.

To support this blog, and to join the discussion, please visit Patreon or SubscribeStar. 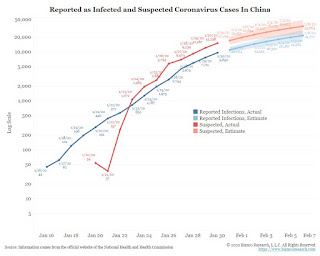