The guy who created the universe 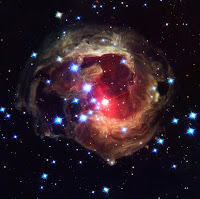 A great divide runs through the world. On one side you have people who insist that they love Jesus and that you should too, or who prostrate themselves toward of Mecca several times daily, wear a hijab and/or grow out their beards and mustaches. The bearded and mustachioed women among them generally prefer to wear a burqa instead, and who can blame them. On the other side you have those who consider themselves educated, and therefore enlightened, and who look down upon the Jesus-lovers. They generally decline to do the same for the Muslims, at least in public, out of political correctness. Instead of finding succor and solace in their faith, this latter group seeks to achieve the same effect by popping pills.

I believe that I am in a position to help bridge this gap because I have spent a lifetime on both sides of it without experiencing any cognitive dissonance. On the one hand, I am an engineer by training and had a career in high energy physics designing equipment for experiments that tried to find out whether protons decay, why there is so much more matter than antimatter in the universe, and just how precisely can we measure a certain physical constant before the project runs out of money. On the other hand, I am ordained as Reader in the Orthodox Church, know how to chant in Church Slavonic and am generally conversant with the culture and the rituals of Orthodox Christianity. In the interest of helping people understand each other better, I want to try to bridge this gap by posing and answering a few probing questions such as: “Who is this God character anyway?”, “Does it make any sense to say that God either does or does not exist?”, “How can we prove that our faith in science isn’t blind?” and “No matter what we believe, aren’t we all delusional anyway?”