The Five Stages of Collapse available in Japanese 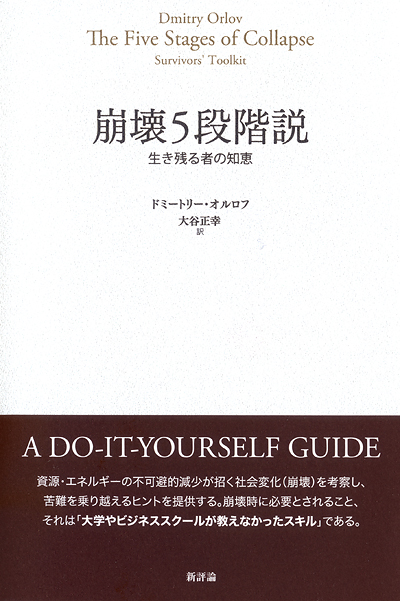 Very pleased to see this, and I have already alerted a number of Japanese friends and associates. At the same time, you should realize that you have your work cut out for you. I've been preaching the collapse message for years, but have found few serious listeners. I don't think the Japanese are any LESS receptive to this message than Americans, but they are perhaps MORE receptive to the message that, no matter how bad things look now, a Glorious Technological Future awaits us, and it's right around the corner. Academics are busy selling this message, and building their careers on it. Children are led to believe they'll be vacationing in outer space when they grow up.

John Michael Greer has one fictional near-futurist story, when things are breaking down everywhere big-time, where the Japanese accept that their nation is in deep trouble (and this story was published before Fukushima added it's extra insoluble problems), and that therefore it's necessary for lots to be drawn amongst the Japanese people, and for repeated waves of the short-straw-drawers to accept being put aboard unemployed oil-tankers (lots of those about), each person to be given some basic survival kit and rations, and then to be taken to other, emptier places around the Pacific Rim, where they will be landed and left to sink or swim on their own efforts. This because there's simply nothing better left that the Japanese state can offer them realistically; and without drastic population-reduction Japan is going to nose-dive in short order into a catastrophic failed-statehood which will actually be worse for the Japanese collectively than the repeated controlled decimations: a programme, in other words, of desperation and grief.

Don't think holidays in space or on the Moon quite chime with this much more realistic prospect, as foreshadowed by John Michael. Children currently suffering the crass, deeply-delusional inevitablePROGRESSforever indoctrination - in Japan, or equally over-populated Britain, or anywhere - are going to be confused and mightily disappointed by the real future for which they're just not being prepared at all. Naturally, these unlucky unprepared kids of the rising generation are going to die in droves before the end of this century, as the global-trade supply lines founder. It's likely to make the population dip in Russia in the '90s look mild by comparison.

It's to be hoped that the Japanese edition of 'Five Stages..' will offer a dose of much-needed realism to those Japanese who are actually able to take it on board seriously, and prepare accordingly. I imagine that they'll be as few as everywhere else though - for the time being.

OMG I found a way to comment here by proceeding through the bowels of blogger.com Thank you for the translation! I'll buy it and push it at the one or two people I know here who are starting to show signs of doubt about Abe's illustrious future if he can just get the damn growth engine a good kick start. My husband (Japanese) is aware of the current trajectory (much better than 90% of the people I know, but only half way there), but he criticizes our Peak Oil friends for being so negative. People, he said, won't take you seriously unless you sweeten the story by saying, "Of course, that is, until our scientists find the solutions--we know they will." These poor folks are in for a let down. Getting them to imagine that let down would be the first step in preparing for it. My husband's father survived WWII by being an excellent farmer, and I suppose a good farmer will not draw Greer's "short straw."

Hello Patricia! I imagine that any allegedly fair, allegedly entirely-random lottery would nevertheless have built into it - quietly! - some sort of practical exemption mechanism for those people, like your father-in-law, whom the power-wielders in Japan really wanted to keep. It would be fixed. Though probably the fix wouldn't be admitted too loudly.

I'd stake my life that that's how things would be shuffled here in the deeply-corrupt ukstate, if such measures had to be taken here too; as may well happen, because of the same ultimately undodgeable over-population realities which threaten Japan.

In the end, gross over-population situations which, with the steady shrinking-back of the current massive level of international trade, simply can't be sustained any longer - won't be.