S/V Hogfish is for sale! 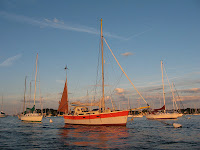 Next week I will launch into a new series of articles about a particular brave new anarchist experiment I am thinking of launching, but in the meantime here is some housekeeping.


No, we haven't given up on living aboard, but we did buy a bigger boat, a Pearson 365. The new boat's name is Prince Kropotkin. Our family has grown and Hogfish is simply too small for us. And so, Hogfish is going to some other yet-to-be-identified happy Hogfish owner.

If you have ever wanted to own a shoal draft ocean-capable cruising boat that's set up for living aboard in northerly climates, here's your chance and, as you probably already know, it probably won't come around any time soon. I haven't listed Hogfish for sale yet. I think the least I can do for my readers is give them the first shot at it.

Here is a write-up on it, and here are two photo albums, one that contains photos of the interior and the exterior which I took last week and another—of Hogfish modeled by our photogenic (and photobombing) cat.

Congratulations on the new family member! Please provide birth statistics and any plans for the new deck hand.

What kind of flag is that?

An Airhead! They work really well. That's a nicely developed interior and a very Bolgeresque hullform. Who was the builder?

A question about boat construction: In your write-up about Hogfish: "It can be treated as a fiberglass hull for most purposes, except that it probably would not like fresh water: it was built with marine plywood that is formulated for salty ocean water, and an extended period spent in fresh water would eventually cause the plywood core to swell up and delaminate."

I have never heard of this difference before, but I can accept the idea that different levels of preservative may be used for different applications.

But... wouldn't even H6 treated plywood that is wet with salt water also be severely degraded in time spans shorter than the design life of a sailboat?

Doesn't the core plywood in the hull of Hogfish stay dry?

I don't know a great deal about marine plywood, and I am going strictly by what Chris Morejohn told me. He said that the plywood he used is formulated with enough salt in it to make it stable as long as it stays in salt water. But it stands to reason that this would work this way: wooden ships were salted down to keep them from rotting—the saltier the better. With plywood, as long as the wood is salted and the adhesive doesn't mind salt water, then the wood will hold. The term "dry" doesn't accord with the term "boat": all wood on a boat has some moisture content; the question is, is it too high or not. Hogfish has averaged one season out of the water for every three years in the water, so its moisture content is on the low side.

Congratulations, Dmitry, and good luck selling the boat. It's beautiful.

Are there any comments of your I could find that address the Singularity? I'm curious about your take on exponential technological growth and AI... it seems as though it (this advancement) is happening, and that your predictions (collapse) are wrong, but I'm sure you have an answer and I'd really like to hear it.

I mention singularity in the Part III on Anarchy, in light of complexity theory, according to which singularity is what makes collapse inevitable.

Cooking aboard is exactly the same as cooking in a small apartment.

Awesome pictures:) always wondered what the Hogfish might look like. I was wondering, a Pearson 365 seems to be a keel boat, which would mean it could not settle upright neither be beached... or am I missing something?

In fact the plywood absorbs more water thru the interior surfaces because the water vapour molecule is smaller than water itself and gets thru the epoxy easier.(assuming the interior is coated with epoxy.

I have never heard of any issues for wood/epoxy boats in fresh water.

"I have never heard of any issues for wood/epoxy boats in fresh water."

I have, from this boat's builder, no less. I've also gone through the trouble of looking at a laminated wood hull that should have been perfect but turned out soft and punky, and then it turned out that this boat had spent a long time in the Great Lakes.

You are partially right about the moisture content. It has to stay within a reasonable range. Water will get through just about anything given enough time, but this boat absorbs water through the fiberglass skin and then sweats it out through the interior (which is sealed with epoxy but not glassed) so it never gets waterlogged and soft.

Normally I don't get into technical discussions about boats, but this thread is getting dangerously close to an area I have expertise in, namely diffusion of water molecules across membranes. The reason why fresh water will wreck the plywood of a boat designed for seawater or saltwater (there is a difference) is the molecular water (that's pure H2O, with no other ions or molecules trying to adhere to it) will diffuse faster through the epoxy moisture barrier from a fresh water source than it will from sea or saltwater. That is because natural waters have "structure", with more water effectively bound up and "large" with more salt content, per Debye-Huckel Theory. The effective size is what slows the transmission of the water through the lattice network of the epoxy, which is a slow-moving liquid, like glass.

Therefore, less unbound molecular water is available to diffuse through the epoxy, because its vapor pressure or water “activity” is lower at a given temperature and pressure. A worst case would be deionized water, which would provide lots of molecular water to diffuse through and add to the moisture content of the wood, which under magnification looks like a giant sponge or condo complex for water molecules. Lots of surface area in wood.

1) What is your asking price, in FRNs?

2) Would you consider accepting an alternative currency, such as silver or Bitcoin?

I would like to get around $1k/ft for this boat. This is reasonable considering how much I have invested in it. USD would be preferred, since anything else would complicate the government paperwork needed to transfer the ownership.

Hmmm...I wonder what the Gougeon Brothers(west epoxy) have to say about fresh vs salt water.
They have supplied epoxy for wood/epoxy boats around the world for decades and never mentioned anything about not using a boat in fresh water.
While technically there might be a difference in osmosis rates.I think in practice it doesn't matter not withstanding one builders opinion and one boat from the Great Lakes.
I will shoot an email off to West System and ask their opinion.

Rate of osmosis is irrelevant. If the outside of the hull is glassed over and the inside is just barrier-coated, then more water will evaporate from the inside of the hull than will enter it from the outside, keeping the moisture content constant. It will also keep the wood nice and salty from the sodium and chloride ions filtering through with the water. Fresh water is the main cause of rot in wood-cored boats, while salt is an excellent wood preservative. This is why old schooners always had salt boxes at the highest point on of the wheelhouse or the cabintop, which were always packed with rock salt. It allowed the entire structure to slowly marinade, killing anything that wanted to eat it. Salt water splash helps a lot too. Fungus rot (misnamed "dry rot" whereas it is definitely wet) doesn't grow in salt water, but it certainly does in fresh water. This is a big problem with wooden (teak) decks overlaid over plywood. Hogfish has no exposed wood anywhere outside of the cabin. Everything is at least barrier-coated, and the entire superstructure is glassed over, then barrier-coated. As long as Hogfish stays in salt water, and is taken out regularly where it can bathe in salt spray, the core will not rot. The places you expect to see rot in a wood-cored hull is on deck (punky wood where rainwater seeped in) and around the keel (rainwater and condensation allowed to sit in the bilge and seep in). If people knew better, they'd keep their bilge salted.

A Pearson 365 offers more room than a flat-bottomed sharpie...?

If the boat's hull is salted, then for sure it will do poorly if transferred to fresh water for some time. Interesting that the old mariners knew how to keep the salt content of their wood boats supplied. I guess gravity had some effect, as well.

Osmosis is an interesting phenomenon. When a fish dies, it bloats. Some of that may be gases evolving from tissue breakdown (their bodies also float, eventually), but I suspect that the fishes' active pumps are shut down, and molecular water rushes in to satisfy the Law of Chemical Potential. Knowing the osmotic rate, one can establish the time of death, ala forensic science. Solid salt in an expandable plastic bag of the right thickness is also an osmotic pump, with it's own stored power source, like a battery.

" USD would be preferred, since anything else would complicate the government paperwork needed to transfer the ownership"'

It wouldn't have to, really. Particularly if a portion were still in USD notes, however small a portion.

> It wouldn't have to, really. Particularly if a portion were still in USD notes, however small a portion.

This sounds like a recipe for being eaten alive by the tax authorities. Imagine trying to convince them that you really did sell a Hogfish-class boat, complete with solar cells and other nice things, for $100.

State taxes and import levies are paid by the buyer, so technically this is not my problem. But if the tax authorities determine that the boat wasn't sold for what it's worth, the buyer would have to either prove that they are a close relative, or pay tax and duty on the boat's book value, which, in this case, is a random number, and could be based on the survey replacement cost, which is something like 100k. Needless to say, that would not be the buyer's lucky day.

She looks a very nice boat. I'm surprised tho that you have not put a junk rig on her, as your seminal Age of Sail article quite convinced me that rig was the way to go!

Congratulations on the new addition, and all praise that you are keeping faith with your convictions in regard to your living accommodation.

Can't believe you are forgoing the Hogfish for a lowly Pearson 365........Guess the Collapse has been postponed......